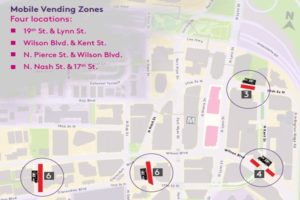 The six-month pilot program may prove to be an answer to the ongoing conflict between food trucks and restaurants about where the trucks choose to park.

The Arlington Economic Development office spearheaded the project in consultation with the Rosslyn Business Improvement District, local restaurants, food trucks, residents and other stakeholders. For now, the pilot will be limited to Rosslyn, with the possibility of extending the project to other areas of the county once its success has been evaluated.

The pilot will set aside 19 parking spaces in Rosslyn for food trucks, for four hours during the day. Between the hours of 10 a.m. and 2 p.m on weekdays, only food trucks will be allowed to park in these spaces. Currently, food trucks are not permitted to stay in a parking space for more than two hours, and some have said that they struggle to set up and do business within that time frame, especially given the competition for such prime parking.

BID President Mary-Claire Burick says she hopes these reserved parking zones with extended time limits will give the trucks increased flexibility, but emphasized that trucks will still be free to park in other spaces.

“This is not a limiting project,” said Burick.”This is to expand and make it easier for them to be successful in these other areas.”

At the County Board meeting on Saturday, July 18, AED’s Jill Griffin told the Board that the success of the project would be evaluated over time, but the outcome is likely to be clear within three months of the pilot’s launch.

“We think we’ll be seeing if it works or doesn’t work very quickly,” said Griffin.

The BID will also be involved in evaluating the pilot. Burick said they were very interested in incorporating feedback, and while reports from the food trucks would be their “first barometer” as to the project’s success, BID members also planned to reach out and hear feedback from consumers.

“We’ll be out and we’ll be listening, and we’ll be incorporating that feedback with the County,” said Burick.

Burick said the BID has plans in the works for a week of kick-off celebrations once the pilot launches, including musical performances, contests and other promotions.