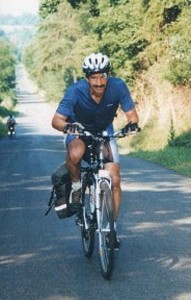 County Board member Libby Garvey and other cyclists will brave the heat on Saturday, riding up to 100 miles as part of the second Annual Kennan Garvey Memorial Ride.

The cyclists will bike on the W&OD Trail from Arlington to Purcellville and back, a 90-mile trek. For riders wanting to do a true century, they can continue to cycle to Roosevelt Memorial Bridge after returning to Arlington.

It’s an easy ride, making it a great ride for a family, Garvey said.

“This ride is the perfect way to remember Kennan and to continue the good influence he had on so many people during his life,” Garvey said.

The ride is also known as the Sizzling Suburban Century because of August’s heat, Garvey said, while promoting the event at County Board meetings. National Weather Service is predicting a high of 91 degrees on Saturday.

Garvey started the bike ride last year in honor of her husband, Kennan, who died of a heart attack in 2008. He was 56 years old.

“The ride means a lot to me and Kennan’s family and friends,” Garvey said. “Kennan commuted by bike to his job at EPA since the early ’80’s.  He loved cycling, loved to help people and loved to get young people interested in bicycles.”

The ride has an entry fee of $25, and participants are encouraged to raise $500 for the Kennan Garvey Memorial Fund. All participants will get a boxed lunch and t-shirt as part of the ride. Those who meet the fundraising goal of $500 will also receive a Phoenix Bikes jersey.

The ride benefits Phoenix Bikes’ Capital Campaign, with proceeds going toward helping the nonprofit fund a new building, now possibly in the area of Columbia Pike. The shop had previously looked at a spot at Walter Reed Drive and W&OD Trail, but that faced some community opposition.

Kennan had wanted to volunteer with Phoenix Bikes after retiring.

“Phoenix Bikes is a wonderful little organization,” Garvey said. ” They just do incredible things. And once they get a building, they’ll be able to take off.”