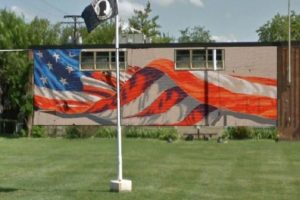 American Legion Post 139 in Virginia Square is about to get a patriotic makeover.

Artist Scott LoBaido has chosen the post at 3445 Washington Blvd for the next mural on his Fifty State Tour, in which he aims to paint a flag mural on either a VFW or American Legion building in all fifty states.

LoBaido has been painting renditions of the stars and stripes for some time. According to the artist’s website, in 2006 he completed a similar mural-painting tour in which he drove across the United States and painted a flag on one rooftop in each state, so that they could be seen from airplanes by departing and returning soldiers.

LoBaido has received national attention for his art, including being named ABC News’ Person of the Week for his 2006 tour.

Post 139 Commander Bob Romano said that when he received the pitch for the flag mural last Thursday, he jumped at the chance.

“It was just too good to pass up,” said Romano.

Although the post has had to spend some money to rent a lift for the artist, the mural itself comes free of charge. LoBaido is scheduled to start work on Sunday, Aug. 16 and finish on Wednesday, Aug. 19.

According to Romano, a dedication ceremony is being planned for Thursday, Aug. 20 at noon. Romano said it will be primarily an American Legion event, and hopes that some Legion Riders will make an appearance.

“I think this is a good thing for the post,” said Romano. “When I first heard about it, I thought, ‘This has to happen.'”