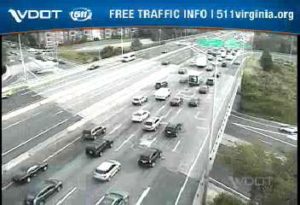 Update at 9:35 a.m. — ART buses are delayed too, Arlington County says, due to Metro-related traffic delays.

If you were commuting from Arlington to D.C. today, or vice versa, chances seem pretty good that your commute was awful.

Major delays were reported on Metro’s Orange, Blue and Silver lines, after service was suspended through much of downtown D.C. due to a derailed non-passenger train.

As if the Metro chaos wasn’t bad enough, a couple of crashes and perhaps an influx of would-be Metrorail riders has turned the length of I-395 into a virtual parking lot, with slow-moving traffic from the District to Springfield.

Also, Route 50 is reported to be backed up to Pershing Drive.

So, if you commute to or from D.C., just how bad was it this morning?