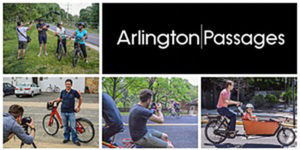 “Arlington Passages,” a new film about bicycling in Arlington, will premiere at Arlington Cinema Drafthouse (2903 Columbia Pike) on Thursday, Sept. 10.

The film, funded by Arlington County and produced by Vancouver-based Modacity, will highlight “everyday Arlington citizens who use a bicycle as means of commuting and/or recreation.” More than 50 people answered a casting call for the film earlier this year.

The premiere will be followed by a question-and-answer session with the cast and crew. Tickets are $7.50 online and proceeds will benefit the Arlington nonprofit Phoenix Bikes.

This isn’t the only bike film recently commissioned by the county. In October 2013 the Drafthouse hosted a premiere for “BikeSwell,” a documentary “chronicling Arlington’s transformation into a more bike-friendly community.”