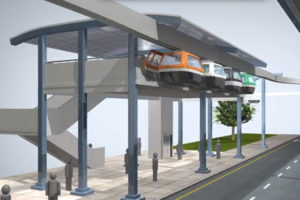 The Columbia Heights Civic Association will meet next month to discuss the possibility of a pod transit system on Columbia Pike.

Such a system could help ease congestion on the Pike, which is currently choked with tightly spaced and frequently stopping buses, particularly during the morning and evening rush hours.

The Columbia Pike streetcar was supposed to be a solution to that problem, but many Arlington residents objected to the system’s cost and the fact that it ran in mixed traffic. Ultimately, the project was canceled.

While a cost-effective, monorail-like transit system that runs above traffic seems ideal in theory, there are questions about the system’s real-world feasibility, cost and the trustworthiness of the company that’s proposing it.

(The system, as conceived, would be built with private funds and would be privately owned.)

Overall, what do you think of the pod transit idea that the civic association will be proposing?