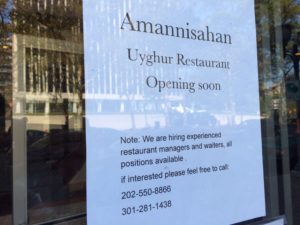 The area’s first Uyghur restaurant will be opening this fall in Crystal City, according to one of its owners, Emam Maimaiti.

The restaurant will open in the space of the recently closed Charlie Chiang’s (320 23rd Street S.).

The new restaurant will be called Queen Ammanisa and feature Uyghur food from province Xinjiang in Northwest China, a place formerly known as Turkestan, Maimaiti explained. Uygur cuisine is being discovered in other parts of the United States, Maimaiti said, but he and his partner Fatima Baikeli are anxious to bring it to the D.C. area.

Uyghur cooking is a product of its geography and therefore is a mix of Persian and Chinese cuisines. It has kebabs and noodles “like you’ve never had before,” Maimaiti said. Lamb, mutton and beef are common in Uyghur food, as are carrots, raisins and lots of vegetables, he wrote in an email. Uyghur food is often halal too, due to the ethnic group’s predominantly Muslim culture.

As for the name, the partners had planned to name the restaurant Amannisahan, as posted on the window of the building now, which was the name of their previous restaurant in Beijing, where the suffix “han” means queen. They have decided to change it to the English translation, “Queen Ammanisa.” Queen Ammanisa was a queen and musician from the region who lived in the sixteenth century.

The owner would not reveal a specific opening date but hopes that the restaurant will be able to open mid to late fall.