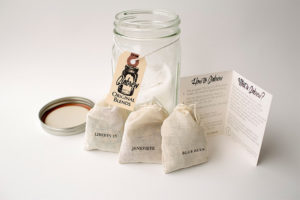 Do-it-yourself booze is popular right now and Arlington resident John Quinn is hoping to capitalize on it.

Quinn and his friend Chris Rories are the co-founders of Ginbrew, a company that helps people make their own gin through a DIY gin kit.

“It makes pretty cool gin, and we thought people would be interested in making it themselves,” Quinn said.

After a week, the mixture is poured through the cheese cloth in order to remove any of the botanicals. Rories recommends using middle-of-the-shelf vodka like Smirnoff.

“Gin is like flavored vodka. The original flavored vodka,” said Quinn, who also serves as the chief marketing officer for the company.

Rories is currently the mastermind behind each of the mixtures, while Quinn works on marketing and tasting each flavor.

Ginbrew currently sells two kits, both of which cost $29.99. The original Ginbrew kit has a “Liberty 13” botanical blend, a “Blue Ruin” botanical blend and “Jenevieve” botanical blend. The Liberty 13 is the flagship blend and is a mixture of 13 botanicals, according to the website. The Blue Ruin has a more traditional gin blend and is heavier on the juniper berry and the Jenevieve is more floral, Rories said. 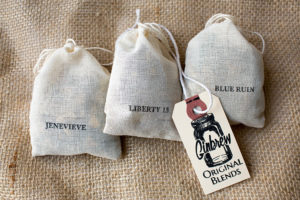 The company also has a summer brew kit, which includes a “Gravier Street” blend, which is heavy on the citrus and meant for gin and tonics, and a “Hops Populi,” which makes a hoppy gin with citrus and floral hints, Rories said. The summer kit also comes with a Liberty 13 blend.

Ginbrew is eight months old, but it is already reaching a large customer base, Rories said.

The company has shipped kits to 49 states, as well as to places in Europe, including the United Kingdom and Germany, he said. It has also received positive reviews from Brightest Young Things and a United Kingdom gin review website. 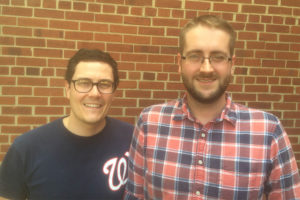 Down the road, Quinn would also like to start selling the kits to bars so that they could make their own house gins, he said.

Rories and Quinn currently handmake each kit, and it takes a couple of hours to make a batch of 60 kits, Rories said. Each botanical mixture has about 14-16 different components and each mixture has to be the same each time.

“One of the challenges we had to overcome was how to mass produce,” Quinn said.

The two would also like to expand the company, possibly going beyond gin. Rories is playing with the idea of infused rum kits, where customers could make their own spiced or other flavored rums, he said.

(Arlington has been home to two other DIY booze companies that we’ve profiled — The HomeMade Gin Kit and Age It Yourself, which offers kits for whiskey enthusiasts.)

Currently Rories and Quinn run the company in addition to their full-time jobs, but the dream is to turn Ginbrew into a full-time operation, they said.

“Ultimately, we found it’s [Ginbrew] very rewarding,” Quinn said. “It’s something we’re passionate about. And its ours.”