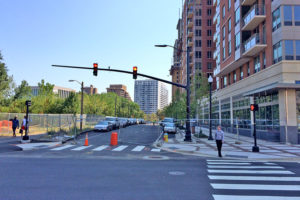 Pentagon City and Crystal City may be connected by a multi-modal passageway by the end of the year.

The county is working with a private developer to expand 12th Street S. between S. Fern and S. Eads Streets to better connect Pentagon City and Crystal City.

Two-way traffic on the new 12th Street S. extension is anticipated to start in 2016.

The entire project is anticipated to be completed in 2016, according to the project’s website, but a target date has not been set, said county spokesman Eric Balliet.

The southern part of the 12th Street S. extension is mostly complete. The developer still needs to install traffic lights and finish utility work before the road can open to one-way traffic, but Balliet said he did not know when that would happen.

“We expect this part of the street to open to one-way traffic later this year (no set date yet),” he said via email. The road is currently blocked off with gates and traffic cones, but pedestrians are able to use a sidewalk on the right side of the street.

The first half of 12th Street S. was constructed as part of the Metropolitan Park development project. Private developer Vornado is building a new complex with 22 levels, 699 apartments and 41,679 square feet of retail space next to 12th Street S.

A Whole Foods grocery store is also being built on the first level of the apartment building. There is no target opening date for the store, according to Katie Malloy, a PR rep for Whole Foods.

Metropolitan Park “completes the pedestrian streetscape along 12th Street for a seamless, urban experience between Pentagon City and Crystal City,” according to the Crystal City BID.

The northern half of 12th Street S. is expected to be completed next year, and is being constructed as an early part of the PenPlace development, Balliet said.

“I don’t have any updates about the timing of that portion,” he said.

PenPlace will sit next to the Marriott Residence Inn, off of Army Navy Drive and will extend to the new 12th Street S. The development, also being built by Vornado/Charles E. Smith, is projected to be five different buildings. The 16 to 22 story towers are expected to be office buildings, but one may be used for residential uses. A 300-room hotel is part of the five building plan and three connected open spaces are also being planned for the project.

There’s no word yet on when the bulk of the construction on PenPlace might begin.