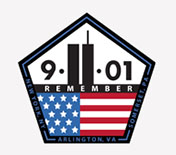 Multiple roads will be closed in Arlington this weekend due to a 9/11 memorial race, a triathlon and festivals.

The 14th annual Arlington Police, Fire and Sheriff 9/11 Memorial 5K Race on Saturday will shut down some streets around the Pentagon.

Online registration is closed, but the race is holding in-person registration for $50 on Sept. 10 and 11 from 10 a.m. to 8 p.m. at the plaza next to Arlington Police headquarters (1425 N. Courthouse Road). On race day, Sept. 12, runners can sign up from noon to 5 p.m. at the DoubleTree. All participants get a commemorative shirt and post-race refreshments at the DoubleTree.

For the race, both directions of Army Navy Drive between 12th Street S. and S. Eads Street will be closed from about 3-8 p.m.

All roads that cross Army Navy Drive will be closed for approximately 20 minutes.

Street parking will also be limited in Crystal City during the race.

In addition to the 9/11 Memorial 5K, there are two festivals shutting down roads on Saturday. The Prio Bangla Street Festival in South Arlington will close 9th Street S. from Walter Reed Drive to S. Highlands Street from 8 a.m. to midnight.

The Rosslyn Jazz Festival in Gateway Park (1300 Lee Highway) will close southbound N. Fort Myer Drive between east and westbound Lee Highway from 8 a.m. to 8 p.m. There will be detours from on westbound Lee Highway and south on N. Scott and N. Veitch Streets for cars coming from Key Bridge. Heavy pedestrian traffic is expected between 2-10 p.m., according to ACPD.

On Sunday, roads in Pentagon City will be closed again, this time for the Nation’s Triathlon. The I-395 HOV lanes from the 14th Street Bridge in D.C. to the HOV overpass at S. Fern Street will be closed from 6 a.m. to 1 p.m. to allow triathletes to complete the bike leg of the race.