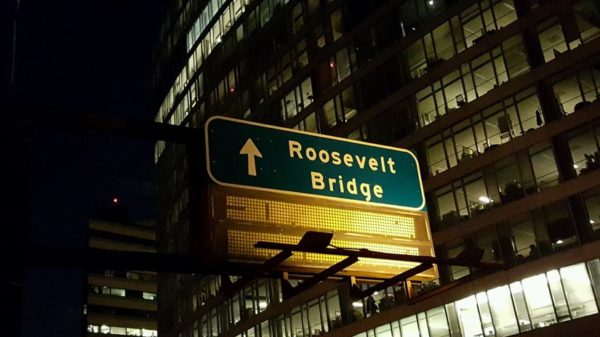 ‘No Drone Zone’ Reminder for Pope’s Visit — Pope Francis begins his three-day visit to D.C. this afternoon. The Arlington County Police Department and the FAA are reminding residents and visitors that the airspace around the District, including Arlington, is a “no drone zone.” [Twitter, FAA]

Widening of I-66 Inevitable, Says VDOT Chief — Widening I-66 to three lanes between the Dulles Connector Road and Ballston is an inevitability, says Virginia Transportation Sec. Aubrey Layne. However, VDOT will exhaust every alternative before moving forward with expansion, Layne said. [WTOP]

Celeb Posts Pic from Arts Center Installation — A giant dart on the front lawn of the Arlington Arts Center in Virginia Square is gaining some fame. Comedian Nick Swardson over the weekend posted on Instagram a photo of a woman jokingly posing as if the dart had hit her in the rear end. He was apparently unaware that the woman was DC’s 107.3 FM personality Sarah Fraser. The dart is part of a well-reviewed installation at AAC called “Play.” [Sarah Fraser]

Pope Prayer Protest at DCA — Airport workers and a local pastor will hold a “worker pray-in” at Reagan National Airport this afternoon, in advance of the pope’s visit to D.C. Workers are seeking “a living wage, improved training and adequate resources.” [SEIU 32BJ]