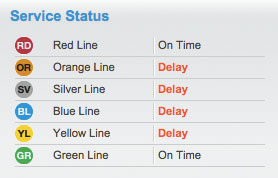 Passengers at Arlington Metro stations are reporting significant problems on the Orange and Silver Lines today.

Metro said that an inbound Orange Line train offloaded at East Falls Church just before 8:30 a.m. due to a brake problem.

That, coupled with reduced rush hour service on the two lines due to power issues around the Stadium-Armory station following last week’s transformer fire, has caused big delays.

Via Twitter, riders are reporting longer-than-usual waits between Orange and Silver Line trains. Trains that are arriving at Arlington stations are full, causing overcrowding at the stations as riders continue to wait for trains.

I've been in Clarendon metro for 40 minutes now. About 5 cars have arrived that were packed. Stem-to-stern. Fml https://t.co/md5kbILKzA

22 minutes between trains on OR/SV at Courthouse. Get it together @Metrorailinfo #wmata

Metro says that repairs on its nine-megawatt power substation near Stadium-Armory are expected to drag out over the next six months or so. During that time, speed restrictions will be in place around the station, and Orange and Silver Line trains will run less frequently during rush hour while skipping the station entirely — a strategy intended to reduce congestion while coping with the lack of track power around Stadium Armory.

“On Friday, Metro began running Orange and Silver line trains every 8 minutes during rush hours, rather than every 6 minutes, to reduce the number of trains in service at any one time,” the transit agency said in a press release. “Metro is also increasing the number of 8-car trains on the Orange and Blue lines to provide additional capacity.”