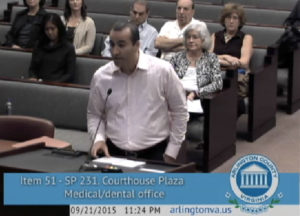 (Updated at 10:55 a.m.) The Arlington County Board last month came one vote away from kicking out a long-time Courthouse dentist office.

The little-noticed item came at the end of a long County Board meeting on Monday, Sept. 21.

At issue during the 40 minute discussion of the item: whether the dentist’s office — Courthouse Art of Dentistry — should be allowed to stay in the Courthouse Plaza shopping center at 2250 Clarendon Blvd as part of a regularly-scheduled Site Plan Amendment review.

County Board member Libby Garvey, who supported the office in the vote, wrote about it in her most recent email newsletter to constituents.

There has been a dentist at Courthouse Plaza for about 20 years, although the site plan originally called for retail to be in that space. Repeated attempts by retail stores to locate there had resulted in several store closures, so a waiver was granted to allow a dental office. The waiver was up for renewal. The dental office has thrived, the dentist does pro bono work for the Free Clinic and takes hotel guests when they need a dentist. A few people insisted that this location was not compliant with the site plan and the dentist had to go. The building owner said he could find no one else to fill that space and asked us to please allow the dentist to stay. Hundreds of patients and supporters signed a petition asking for the dentist to stay. Still…..this was the third time in a year he had to come before the Board pleading for us to allow his successful business to stay. He can stay, but the vote was far too close: 3-2. I thanked the dentist for all he does for our community. I told him and his many supporters who stayed until 11:55pm I was embarrassed the Board made this so hard for a successful business that serves Arlington well. It really was one of the more bizarre issues I’ve dealt with as a Board member.

Speakers at the meeting universally called for the Board to let the dentist office stay. The attorney for owner Dr. Joseph Khalil said that they had collected about 500 signatures in support of the practice. (The office is thriving and has 2,200 patients, the attorney said.) 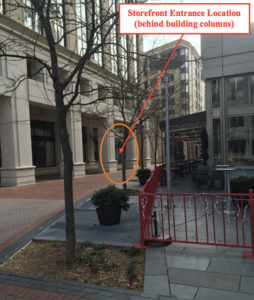 The lone voice opposing the office was the Clarendon-Courthouse Civic Association, which wanted a more “active” business in the space, which is located across from Fireworks Pizza.

“CCCA renews our objection and voted to firmly oppose a permanent exception to the dentist office in a space designated for anchor retail as far back as 10 years,” civic association president Adam Thocher said in an email to county staff. “We encourage ongoing discussion between [landlord] Equity and Arlington Economic Development to market and secure a tenant that will help fulfill the promise made to the community of activating Courthouse Plaza.”

County staff, however, said that the use was appropriate and consistent with the county’s new Retail Action Plan, which allows for “retail equivalent” uses like medical and dental offices in lieu of more traditional stores and restaurants in certain retail zones, including the Courthouse area.

“We believe the use provides service to residents and to office workers in the plaza,” said Michael Cohen, a county staff member.

The dentist’s attorney, meanwhile, said that the retail landscape has changed since a dentist’s office first opened in the space in 1993. (It has since changed ownership.) She said that online shopping has limited the utility of small retail storefronts and that Courthouse Plaza already has stores that commonly use such spaces — a coffee shop, a cell phone store, etc.

Mike Farrey, brother of a dentist at the practice, suggested that a dentist office might even be preferable to an “active” use.

“There are enough coffee shops and restaurants in Arlington, and enough empty storefronts,” he said.

Patients of the office who spoke at the meeting said that there’s no justification for making a successful, community-serving business pack up and move. One called it “un-American.”

“I feel like this is a complete waste of community resources,” said the man. “It’s not a gentlemen’s club, it’s not a bar, it’s not an adult bookstore… what use is it to create another empty storefront?”

“If it ain’t broke, don’t fix it,” said another patient.

In the end, the Board voted 3-2 — with retiring County Board members Mary Hynes and Walter Tejada voting in the minority — to renew the site plan amendment and allow the dentist to stay, with no further scheduled reviews.

County Board member John Vihstadt said that kicking the dentist out would only create an empty storefront, agreeing with Dr. Khalil’s attorney in suggesting that the space was too small and ill-configured to be attractive to any likely “active” retail tenant.

“Why would we want to open up a new cavity in Courthouse Plaza?” he quipped.