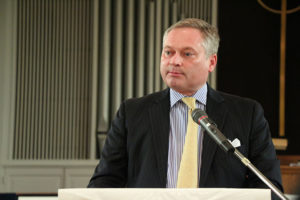 Independent Arlington County Board candidate Mike McMenamin says he is “worried about overbuilding in the Pentagon City area.”

McMenamin, a former Arlington County Civic Federation president who’s endorsed by the Arlington County Republican Committee and County Board member John Vihstadt, says he shares concerns about traffic and a strain on local services with residents from a nearby neighborhood.

Residents of Arlington Ridge — an affluent neighborhood overlooking Pentagon City — have long protested planned development in Pentagon City and Crystal City areas on the grounds of negative impacts to their community. Among the projects causing concern: approved development on the Pentagon Centre shopping center site and the as-yet vacant PenPlace site, plus proposed additions to the RiverHouse apartment complex.

McMenamin issued the following press release this morning, suggesting that such development does not represent “smart growth.”

County Board independent candidate Mike McMenamin expressed support today for a citizens’ group that is worried about overbuilding in the Pentagon City area.

“I agree with the Arlington Ridge Civic Association (ARCA) that the County board should undertake a study to determine how much additional density 22202 (Crystal City, Pentagon City and adjacent residential neighborhoods) can accommodate without compromising the area’s livability,” said McMenamin.

ARCA is concerned about traffic and transit congestion that will result in coming years, together with the additional fire, police, school, green space and other services that will be needed once all of the development the County has already approved for construction in 22202 gets built out.

Further, Vornado is now asking the County to amend the General Land Use Plan and up-zone its River House property to allow it to build an additional 1,084 apartments on top of the already approved development to be built in Pentagon and Crystal City.

In the past, the County has considered each new proposed building and zoning variance, one at a time, in isolation of its impact on the greater, surrounding area.  “That needs to change,” McMenamin said, “particularly in 22202 which is a uniquely cordoned off segment of the County with limited transportation avenues.”

McMenamin supports the 22202 residents’ request that the County should step back, take a breath, and reassess its extraordinarily robust development policies that were enabled by the Metro system.  “Until we better understand how much additional growth our infrastructure can accommodate,” McMenamin noted, “we cannot claim to be approving ‘smart growth.'”