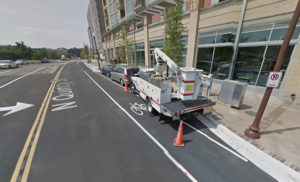 A prominent local cycling organization is launching a campaign to push for changes to make Ballston more bike friendly.

The Washington Area Bicycling Association will be holding a campaign kick off event at Arlington Central Library (1015 N. Quincy Street) on Wednesday, from 6:30-7:30 p.m. The campaign is the work of the group’s Action Committee for Arlington County. 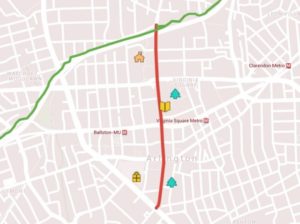 “For the past few months, we have been hard at work planning how to transform Ballston into a place where it is not just possible to bike, but actually fun, easy, safe and stress free — and while we’re at it — walkable, too!” says a web page for the event.

The existing Quincy Street bike lanes are uncomfortably close to frequent and fast moving traffic. The bike lanes disappear at a major intersection (Washington Blvd) forcing people on bicycles to merge with drivers already navigating a tricky intersection.  Delivery vehicles and double parked cars frequently block these lanes creating more merging conflicts as drivers and bicyclists try to share the same space. Furthermore, the lanes are difficult to access from the Custis Trail because there are no stop signs or traffic lights to help south-bound cyclists cross the street.

While bike lanes may be sufficient for experienced cyclists, they are not the kind of protected, inviting infrastructure that we need to get more Arlington residents to feel comfortable getting around by bicycle.

The group wants to see protected bike lanes on Quincy Street, complete with bollards preventing illegal parking in the bike lane, from the Custis Trail to N. Glebe Road.

Among the benefits, according to WABA, would be:

Under WABA’s proposal, lanes would be narrowed on Quincy Street and street parking would be placed between the protected bike lane and the vehicle travel lane.