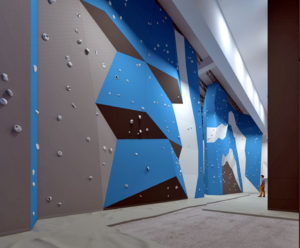 Earth Treks Climbing Centers is planning on opening a massive new climbing gym in Crystal City, its first inside the D.C. Beltway.

The Maryland-based company is planning to open a gym at 1235 S. Clark Street, two blocks from the Crystal City Metro station, according to a State Corporation Commission filing. Without saying where exactly it would open, the company yesterday announced the new gym on its website.

“Earth Treks’ newest facility will be industry leading in amenities and size,” the company said. “With a massive footprint exceeding 45,000 square feet, the D.C. metro location will be among the biggest climbing gyms in the nation… The roped climbing area alone is so massive that you could drop the entire Earth Treks Timonium building in it and have room to spare.”

The gym is expected to hold its grand opening by the start of summer 2016.

Earth Treks has three existing climbing centers in Maryland — in Rockville, Timonium and Columbia — and another in Golden, Colorado.

The address in the SCC filing — 1235 S. Clark Street — is the same address as the Sport&Health Crystal Gateway fitness club. A Sport & Health gym near Clarendon closed last year.