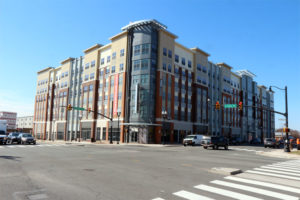 (Updated at 12:50 p.m.) Two popular restaurants will be joining Chipotle on the corner of Columbia Pike and Glebe Road.

Sugar Shack Donuts, a Richmond-based eatery serving fresh donuts and coffee, and 1000 Degrees Neapolitan Pizza, a quickly-expanding New Jersey-based pizza chain, are coming to the ground floor of the Pike 3400 apartment building, according to building permits.

Built on the former Rosenthal car dealership, Pike 3400 is currently home to the only Chipotle location on the Arlington stretch of Columbia Pike.

Sugar Shack attracted plenty of cult-like buzz — and actor Kevin Bacon — when it opened in Alexandria earlier this year. The location is owned by former Virginia delegate Rob Krupicka and makes its donuts in-house, without the help of machines.

The new Sugar Shack on the Pike will also be owned by Krupicka. He told ARLnow.com that the store should be open in “early 2016.”

1000 Degrees has been opening hundreds of new locations nationwide, building a business based around $7.99 personalized pizzas which are cooked in two minutes — similar to existing local fast-casual eateries like Spinfire. 1000 Degrees also offers breadsticks, build-your-own salads and fire roasted wings.

So far there’s no word on when 1000 Degrees will open.

Another building permit application indicates that a Supercuts hair salon is also planning to open at 3400 Columbia Pike.