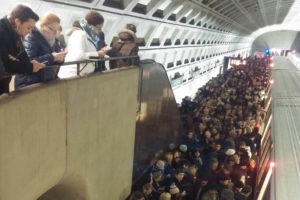 Metro announced yesterday that Paul Wiedefeld, the former CEO of BWI Thurgood Marshall Airport, has been selected as the agency’s next General Manager and CEO.

Following a lengthy search process, the WMATA Board of Directors is expected to make Wiedefeld’s appointment official on Nov. 19.

With Metro in turmoil due to ongoing rail service reliability problems and financial challenges, state officials and lawmakers welcomed the appointment of an experienced executive to Metro’s top post.

“Today’s news concludes a period of uncertainty for Metro. Paul Wiedefeld’s transportation and executive experience gives him the tools to provide WMATA with the leadership a first class transit system needs. I look forward to working with him to ensure a safe, reliable future for Metro as a critical part of the national capitol area’s transportation infrastructure.”

“I am pleased to see that the WMATA Board has unanimously chosen Paul Wiedefeld to lead the agency as its General Manager and Chief Executive Officer. Mr. Wiedefeld’s significant experience in managing safety and operations in the transit industry will surely serve him well as he steps into his role with Metro. I am hopeful that this appointment, though overdue, will give WMATA the stability and expertise it needs to produce meaningful change across the agency. I look forward to Mr. Wiedefeld’s formal confirmation by the Board on November 19th.”

“We’re pleased to finally see this progress in bringing on new management for Metro after a year-long search.

“As federal lawmakers, we have been strong advocates and effective partners for Metro. In his years of service to BWI, Mr. Wiedefeld has proven himself to be a creative and successful infrastructure manager in the public sector. We are eager to meet with him to emphasize our shared commitment and steady focus on turning-around the troubled Metro system.

“We’re prepared to work with Mr. Wiedefeld as he accepts the challenge of improving the safety and reliability of this pivotal regional investment for Metro passengers and visitors to the national capital region.”

After a jump, a press release from the recently-formed WMATA Riders’ Union.

The WMATA Riders’ Union (WMATARU) is pleased to hear that the WMATA Board of Directors has settled on a new general manager and hope that they are able to successfully complete the contract negotiations in the coming weeks. We trust that`represents the very best of the worldwide candidate pool available to WMATA, and that the Board and executive search committee has been appreciative of his track record with public-facing transit and transportation organizations.

WMATARU hopes that the Board and Mr. Wiedefeld will come to terms on a contract and approve it as soon as possible. WMATA is an agency sorely in need of new and stable leadership. The Riders’ Union looks forward to meeting with Mr. Wiedefeld to hear his plans for reforming WMATA and in order to present him with a number of rider concerns and suggestions. WMATARU also hopes that Mr. Wiedefeld will join us as a regular rider of the system so that he experiences and understands the issues that riders face daily.

“Putting WMATA’s fiscal house in order is important, but the mission of the authority – to provide mobility to the entire region – is even more critical,” said WMATARU Vice Chair and Communications Director Graham Jenkins. “We were dismayed by yesterday’s report showing a continued deterioration of both bus and rail performance last quarter, and trust that the importance of high-quality, frequent transit service is apparent.” Providing reliable service is the core function of WMATA, and the Riders’ Union calls upon Mr. Wiedefeld and the Board to offer additional trains and buses to meet rider demand.

The Riders’ Union will also continue to hold the Board of Directors and appointing jurisdictions accountable for WMATA funding, safety, transparency, and service improvements. Without strong leadership and support from the board, no general manager can be successful.