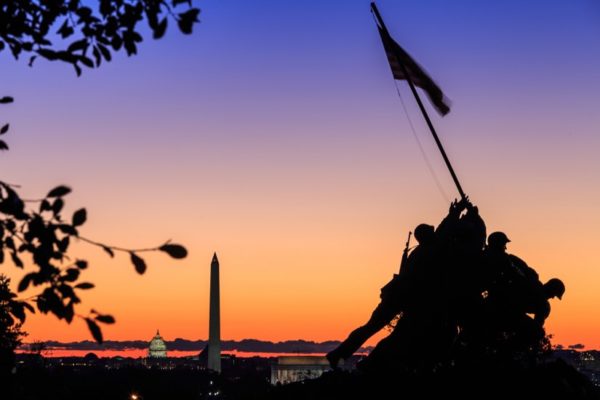 Marine Corps Birthday — Its the Marine Corps’ 240th birthday today. On Thursday, the Corps’ birthday will be celebrated by hundreds of Marines participating in a group run from the Pentagon to the Marine Corps War Memorial, prompting rolling closures on Route 110 between 10 and 11 a.m. [AL.com]

Owner Not Worried About Vacant Rosslyn Office Tower — Monday Properties, the owner of the 1812 N. Moore Street office tower in Rosslyn (and an ARLnow.com advertiser), says they’re not worried that the two-year-old building is still vacant. Monday CEO Anthony Westreich says the company and lender Goldman Sachs are “confident” about the future of Rosslyn and patient as they search for a large anchor tenant. [Bisnow]

School Board Argues H-B Woodlawn Cost — Some Arlington School Board members are worried that a $100 million proposal for a new building in Rosslyn for the H-B Woodlawn Secondary Program would be a budget buster. Superintendent Patrick Murphy has proposed options for bringing down the cost to $85 million, but other School Board members are arguing that such a proposal sacrifices long term good for short term savings. [InsideNova]

Maureen O’Hara Buried at ANC — Actress Maureen O’Hara was buried at Arlington National Cemetery on Monday. O’Hara, who died last month at the age of 95, was laid to rest alongside her husband, an Air Force brigadier general. [WTOP]

Winter Weather Forecast — NBC 4 chief meteorologist Doug Kammerer says Arlington and D.C. should expect 20-25 inches of snow this winter. Kammerer predicts that December will be unseasonably warm, while January and especially February will be colder than average, with a large snow storm expected in February. [NBC Washington]