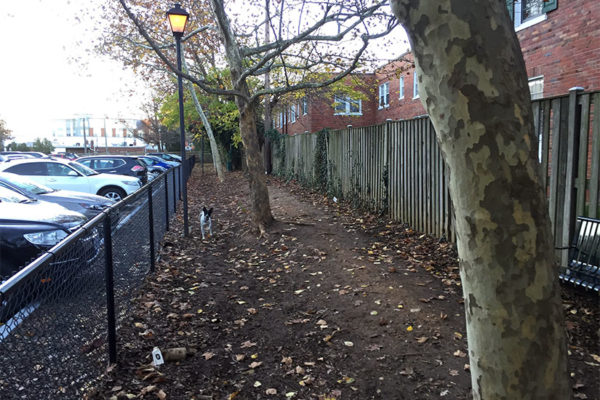 (Updated at 3:50 p.m.) Arlington County officials have reportedly shut down a popular fenced-in “dog run” outside of a Rosslyn apartment community.

In a memo to residents of the Rosslyn Heights and Rosslyn Vue apartments on N. Quinn Street, building managers say that they’ve been ordered to remove the fence around the dog play area.

The decision, managers say in the memo, came from new Arlington Acting Zoning Administrator Arlova Vonhm, who decreed that a permit for building the fence around the nearly two-year-old dog run should never have been approved by the county.

Jace Bauer, a local resident, said that the dog run is “convenient and much enjoyed.” Via email, Bauer said the loss of the area is a blow for residents and for dogs.

“I recently moved to Arlington and have found this small, fenced in area to be a great spot in our community,” Bauer said. “I have met so many wonderful people in my first few months here while taking my one year old border collie mix out for a game of fetch. The nearest dog park (Clarendon) is a 30 minute walk, which is not practical for a quick morning or evening outing.”

The memo from building management, which suggests legal action may follow, is below.

A few months ago Arlington County received a complaint from our neighbors regarding the dog walk area by the leasing office. We have been attempting to work with Arlington County Zoning officials to comply with their requirements and appease our neighbors. Although this area has existed for almost two years, the Zoning Administrator, Ms. Arlova Vonhm, has decreed that the approved permit should not have been approved. Her decision is that the fence violates Arlington County Zoning ordinance and must be removed or we will be subject to fines and legal action for noncompliance. Ms. Vonhm has also been presented with multiple plans to relocate the dog walk to other areas of our property, all of which have been denied.

As such, tomorrow, November 20th, we will be removing the fence to comply with their order. Rosslyn Heights and Rosslyn Vue have always been pet loving communities and it gives us great displeasure to have to do this. Please take some comfort that we do not consider this matter closed. We will be obtaining legal counsel to bring this issue to the attention of the Arlington County Board (http://countyboard.arlingtonva.us/county-board-members) and County Manager, Mark Schwartz.

The next scheduled Arlington County Board Meeting is scheduled for Saturday, January 24th at 8:30am at 2100 Clarendon Blvd., Room 307.

Thank you for choosing Rosslyn Heights and Rosslyn Vue as your home and for your patience and understanding as we work through this situation.

In an email Vonhm, the Acting Zoning Administrator, confirmed to ARLnow.com that today was the deadline for the apartment’s property manager to remove the fence, after it was determined that the county had mistakenly issued a permit for its construction contrary to the property’s approved site plan.

The site plan calls for only landscaping in the area where the dog run now is, Vonhm determined, after receiving complaints from neighbors. She noted that the property manager has the option of applying for a site plan amendment.

“The County’s position is that the fence changes the nature of how the space is used, and creates the problem of dogs running loose and creating excessive noise,” said Vonhm. “The option of applying for a site plan amendment is still open to the property manager, even after the fence is removed. The County has worked in good faith with the property manager to come up with a viable solution that addresses the neighbors’ concerns about noise from the dogs.”