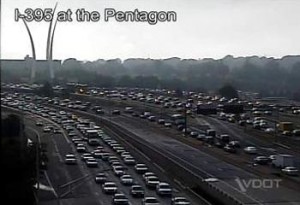 VDOT has a new plan for High Occupancy Toll lanes on I-395, the Washington Post reported late Friday.

The news comes nearly five years after the state scrapped plans to build HOT lanes on I-395, following a legal battle with Arlington County. In a lawsuit, the county argued that HOT lanes, as then planned, would exacerbate pollution from and congestion on I-395, negatively impacting Arlington residents.

Virginia Transportation Secretary Aubrey Lane told the Post that the new plan comes with guaranteed funding for carpooling and transit from private partner Transurban. Construction could start as soon as 2017 and would involve adding a third lanes to the existing HOV lanes while keeping the highway’s overall footprint mostly the same, the Post reports.

No word yet on a reaction from local officials.

Meanwhile, Arlington County has given its endorsement to a controversial plan for adding tolls to I-66 inside the Beltway during peak travel times. By a vote of 3-2 — John Vihstadt and Libby Garvey voted against it — the County Board adopted a resolution supporting the “Transform 66” project.

Last month Fairfax County offered conditional support for the plan, while calling for the widening of I-66. Loudoun County officials oppose the plan, which has faced heavy criticism from suburban commuters.

The plan calls for changing HOV rules on I-66 from requiring at least two people per vehicle during rush hour (HOV-2) to giving drivers the option of either having three people in a car (HOV-3) or paying a toll during peak hours.

In their endorsement, County Board members said they hoped that the changes would prevent the possible widening of I-66 inside the Beltway. The county wants VDOT to at least commit to not considering widening from two to three lanes in each direction through Arlington until 2025 at the earliest.

Lane has previously been quoted as saying the widening of I-66 through Arlington is inevitable.

After the jump, the press release from Arlington County on the I-66 project endorsement.

The Arlington County Board today endorsed in concept the Virginia Department of Transportation’s (VDOT) I-66 Multimodal Improvement Project: Inside the Beltway.

In a resolution  adopted by a vote of 3 to 2, the Board said it endorses “in concept” the implementation of weekday, peak-period, peak-direction, dynamic tolling on I-66 inside the Beltway. It also endorsed in concept the Memorandum of Agreement between the Commonwealth and the Northern Virginia Transportation Commission to use toll revenues to fund crucial multimodal improvements around I-66 inside the Beltway.

“Changes are coming to I-66 inside the beltway, and it is important that Arlington be at the table to ensure that those changes work for our community,” said Arlington County Board Chair Mary Hynes. “The Board today is endorsing the concept of the Commonwealth’s plan for the corridor – and spells out clearly what Arlington believes it will take to ensure a successful implementation.”

The Board set several goals it wants to achieve for implementing the project. Among those are: