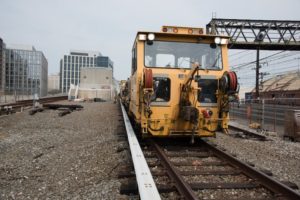 Metro riders had an especially awful commute home on the Yellow and Blue lines tonight.

A piece of maintenance equipment — like the one pictured, left — broke down just outside the National Airport station this afternoon, leading to single-tracking. While the equipment was eventually moved to allow normal rail operations, delays lingered into the evening rush.

Via Twitter, riders reported various problems, from long delays to trains being offloaded at already-crowded station.

Train just offloaded at Pent. City – too crowded to close doors. How long before space on a train to board? #wmata pic.twitter.com/M2g50aPxFH

@unsuckdcmetro Been sitting at Crystal City for over 30mins. 3 trains passed heading towards pentagon. What a mess!

In 45 minutes I've made it from Pentagon to Crystal City, now sitting and can't understand a word our driver is saying #wmata #sucks

@unsuckdcmetro Yellow Line to Huntington was just offloaded at Pentagon.

You're going to want to avoid the #BlueLine. 50 minutes, Foggy Bottom to Pentagon City @FixWMATA

As of publication time, even more issues and delays were being reported on the Blue, Orange and Silver lines in D.C.