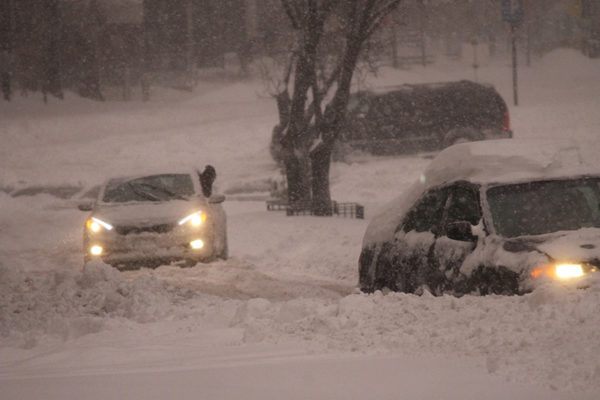 More than a foot of snow has already fallen across the Arlington area, according to the National Weather Service. And it’s only going to get worse.

Wind gusts of up to 50 miles per hour, whiteout conditions and up to another foot of snowfall are possible through late tonight, says the Capital Weather Gang.

According to the Virginia Department of Transportation (VDOT), most roads throughout the area are in “moderate to severe” condition, meaning that a layer of snow or ice partially or fully covers the roadway. VDOT added that workers in Northern Virginia will attempt to clear interstates, high-volume roads and subdivisions throughout the day.

Residents are being strongly urged to stay off the roads unless absolutely necessary. Most seem to be heeding the advice, as traffic is nearly nonexistent even on normally busy roads in Ballston. Still, some people are making a go of it, despite VDOT’s advice. A pair of drivers were observed struggling to climb a hill on Wilson Boulevard in Rosslyn around 7:30 a.m. this morning.

Though the snowy conditions thwarted drivers across the area, Dominion has not reported any widespread power outages throughout the area since the blizzard began.

Here’s what some other ARLNow readers reported on Twitter throughout the night and early this morning:

@ARLnowDOTcom I have a very confused lab pic.twitter.com/A1tHBmradv

What are you seeing out there? We want to hear from you. Tweet at us or send us an e-mail. We will provide live updates as the storm progresses today.