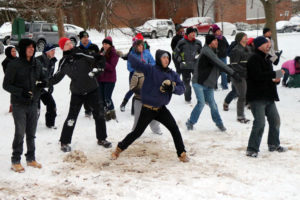 You’ve probably watched everything Netflix offers, surfed the far corners of the internet, and will be ready to get off the couch. Well, you’re in luck because several snowball fights around Arlington could be the perfect way to release some pent up energy tomorrow.

The most hotly anticipated we’ve found, based on the nearly 630 people who have already responded on Facebook, will be near the Clarendon Metro station at noon on Jan. 24.

There will be another snowball fight less than a mile away in Virginia Square. That one begins at 1:00 p.m. in Quincy Park (1021 N. Quincy Street), and the organizer’s Facebook post claims the fun will keep going “until people have tired themselves out.” A similar Quincy Park snowball fight nearly two years ago attracted more than a hundred participants.

Not to be outdone, residents along Columbia Pike have posted a Facebook invite for a “neighborly” snowball fight at Penrose Square (2501 Columbia Pike). The snow flinging is set to start at noon tomorrow.

Metro will remain closed throughout the weekend and travel conditions are expected to be terrible, so it’s recommended that snowball fight attendees plan on safely walking to the events.