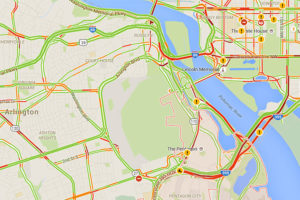 Federal government employees are going back to work today for the first time since the blizzard, but it’s slow going for those trying to commute from Arlington to the District via car or bus.

As of 9:45 a.m., the northbound I-395 HOV lanes are jammed starting around Army Navy Country Club, while mainline I-395 slows near the Pentagon.

Memorial Bridge and Washington Blvd around the Pentagon is jammed. Traffic on eastbound I-66, approaching the Roosevelt Bridge slows near Rosslyn. N. Lynn Street in Rosslyn and the Key Bridge are also crawling.

Federal employees are to report to work on a three hour delay today, with an option for unscheduled leave or telework, the Office of Personnel Management announced last night.

Arlington County offices opened on time today, though certain community centers are closed or operating under modified hours. Arlington parking meters are being enforced today for the first time since the blizzard, but only in commercial districts. While Arlington Public Schools are closed, APS offices are opening at 10 a.m.

There’s some good news for commuters: full Metrorail service has returned to all lines, though some delays were reported on the Red and Green lines this morning. Also, the Custis Trail is clear for cyclists, though only one lane is cleared in places and some connecting trails are still snow-covered.

@ARLnowDOTcom almost 10am and traffic from Rosslyn to Georgetown is snarled. Looks like roads not ready for traffic pic.twitter.com/X1joOvFRqX