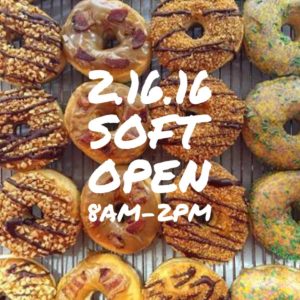 The first Arlington store for the popular Richmond-based donut chain is located on the ground floor of the new 3400 Pike apartment building, at 3400 Columbia Pike.

Sugar Shack is open from 8 a.m.-2 p.m. today (Tuesday), as part of a week-long “soft opening,” the store said via its Facebook page. The official opening is scheduled for Saturday.

“The Columbia Pike community has been really amazing and supportive and we are excited about serving them,” said owner Rob Krupicka, a former state legislator who also owns a Sugar Shack location in Alexandria. “Neighbors will see that the walls of the new store will be covered with pictures of people from the Pike and we are so looking forward to partnering with the community and local food stores to create some unique donut flavors.”

Sugar Shack is noted for making its donuts in-house, by hand, and for its variety of flavors.

On Saturday, all Arlington County public servants – firefighters, police officers, teachers and government employees – will get a free donut by showing their ID, the store said in a press release.

“I used to be a public servant for many years,” Krupicka said in a statement. “I know how hard it is. We are delighted to be in this vibrant neighborhood and are really looking forward to getting to know the Arlington community that much better.”

Another trendy East Coast donut chain, Duck Donuts, has been serving large crowds since it opened in the Lee-Harrison shopping center on Lee Highway in November.