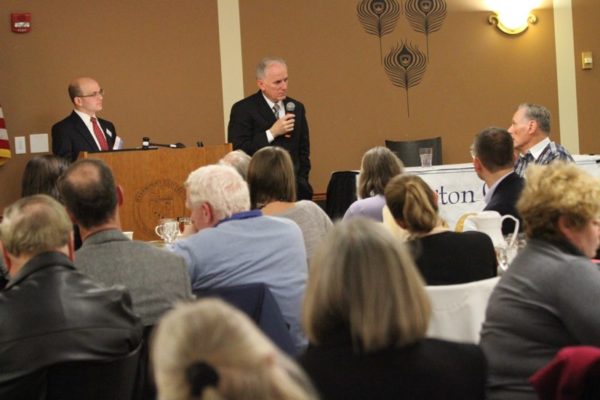 You know a top executive’s gig is tough when an entire room applauds after someone gets up and says, “thank you for taking the job.”

Wiedefeld started the night by telling the crowd he has been fighting a cold since the January blizzard, when Metro shut down for a couple days, and will be taking a decidedly unglamorous trip to Lincoln, Nebraska later this month to check on the manufacturer of Metro’s problematic 7000-series railcars.

Turning around Metro is an exhausting job and Wiedefeld sounded, well, a bit exhausted.

During the audience question-and-answer session, he was asked whether Metro should lower the expectations of riders for the reliability of a two-track system built in the 1970s for a sleepier capital city

“I do think we need to be more realistic about what’s achievable and what’s not,” Wiedefeld said. “You can only fit so much through a small tube, that’s just reality. We need to do a better job of educating the public, for sure.” 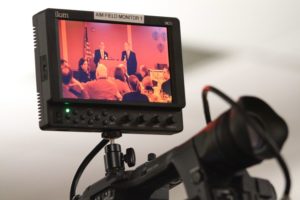 “Failure in some of the basic service delivery,” he said, listing Metro’s woes. “Communication isn’t to the standard it should be. In some cases there’s been a total lack of transparency.”

“I don’t think we’re doing the best we can do,” he continued. “We’re not putting out the service the best we could, and that’s the first thing we need to do.”

Under Wiedefeld, who was formerly the CEO of BWI Airport in Maryland, Metro has three main priorities: improve safety, improve basic service reliability, and get its fiscal house in order.

Wiedefeld is approaching the challenge from the bottom up: he’s been trying to spend as much time as possible with Metro’s front-line employees: those maintaining the rails, driving the buses and cleaning the trains. He said Metro’s headquarters and leaders have been too removed from its day-to-day operations on the ground, something he wants to improve.

Wiedefeld has also been making an effort to be a more visible leader in the region. That’s what brought him to the Committee of 100. At the meeting, Arlington County Board Chair Libby Garvey marveled that Wiedefeld was the first Metro general manager she had actually met in person in all of her years of public service.

The realities of Metrorail’s maintenance needs may require some fundamental changes in the way Metro operates. Poor maintenance, after all, is what’s causing much of Metro’s current unreliability. The agency doesn’t even have enough working rail cars to meet its promises about eight-car trains. The delivery of the new 7000-series cars — only 80 are in service so far — will help, but they must be maintained, in addition to track and the myriad other components of the Metro system.

“We need to take a hard look at how we’re doing things, particularly on the maintenance side,” Wiedefeld said. “These are big, complex systems.” 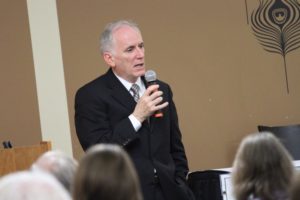 To improve safety, Metro is “churning away” at more than 200 issues identified by the Federal Transit Administration, following last year’s fatal incident at the L’Enfant Metro station. Wiedefeld says his family rides Metro and he’s confident of its safety, but there’s still plenty room for improvement.

Aside from the safety of the system itself, crime in Metro trains and stations is also a concern. A younger member of the audience asked about YouTube videos of violent encounters and the murder of a recent college graduate in a station last summer.

“Statistically, it’s a very very safe system,” he said, citing the statistic of six “part-one” crimes per million passengers. Wiedefeld, however, again said there was more to be done. Metro Transit Police should be more visible in stations, he said, helping to deter crime. It also wouldn’t hurt if criminals knew the long odds they face when committing crimes in Metro stations, either.

“Particularly on the rail side, we catch them most times, thanks to all the cameras,” he said. “You might want to do that somewhere else, because we’re going to get you.”

Though optimistic about the feasibility of turning Metro around, Wiedefeld was short on some specifics. Labor-related costs represent more than 70 percent of WMATA’s budget and critics have questioned whether union contracts are preventing some needed changes and employee accountability.

“It’s in the construct of a very complicated labor environment that we work under,” Wiedefeld said. “That’s not an excuse, that’s just the way it is.”

Wiedefeld said he’s hoping Metro can help spur local leaders into setting up a dedicated regional funding source for Metro, like other transit systems have. The goal isn’t to secure more money for the system, he said, it’s to allow Metro to focus more on region-wide priorities rather than catering to the whims of the localities that have to allocate money every year to keep Metro running.

Metro will also benefit from being run more like a business, with more rigor behind the prioritization of capital expenses, he said.

“We have a responsibility to run this as a business, even though we’re in a public sector environment,” he said. “We’ve got to make sure we’re using the dollars efficiently and that we’re showing people where we’re spending the dollars.”

Metro’s turnaround is crucial to the region, for which Metro is a part of daily life and of its urban identity.

“Mall, monuments, Metro,” Wiedefeld said, referring to the experience of visitors to the city.

“There’s no debate about the importance of this system to the region… and to the environment,” he said. “We have to make sure it performs because it does drive the economy, it does drive daily life.”

At a time when ridership is declining to levels not seen in a decade, and rider satisfaction continues to fall, there’s little indication that the job of fixing Metro will be getting easier anytime soon. Wiedefeld, however, said he’s committed.

“Clearly there’s a lot to do… we didn’t get here overnight,” Metro’s leader concluded. “I’m not expecting you to do anything but say: ‘that’s great, but go fix it.'”

END_OF_DOCUMENT_TOKEN_TO_BE_REPLACED

More Stories
Arlington Has the Highest-Earning Millennials in the U.S.Pentagon Row to Host 80’s Night on Saturday