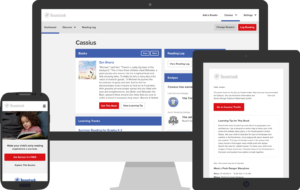 When Arlington-based startup Zoobean appeared on ABC’s Shark Tank in 2014, it was trying to be a “Pandora-like service for curating and delivering children’s books.” That pitch enticed billionaire “shark” Mark Cuban, owner of the Dallas Mavericks, to invest $250,000 in the company.

But Zoobean recently pivoted to focus on a new line of business. Called Beanstack, the new service provides cloud-based software to power reading programs at libraries and schools.

The $400,000 funding round closed about a month ago, the company says.

Lloyd, who founded the company with his wife, Jordan, said the past few months have “been a whirlwind” for the company. Zoobean’s services are now being used by 140 libraries in North America, from Maine to California to Canada.

Arlington Public Library was an early adopter and offers the book recommendation service to parents and children for free, as does Montgomery County, Md. and some other D.C. area jurisdictions. Arlington is also considering implementing a Beanstack-powered reading program this summer, according to Lloyd.

Beanstack helps to power summer reading programs by recommending books, keeping track of who has read what and issuing prizes and badges for top readers. It runs on computers, tablets and mobile phones. Lloyd says it’s a modern solution for making the laborious task of running a reading program more fun and interactive for all involved.

“Libraries have reading programs… and those historically have been run on paper or on outdated software,” he said.

The system works for both children and adult participants and can potentially be expanded beyond reading. “Anything the library is trying to achieve,” from exercise programs to events, could be powered by Beanstack, said Lloyd. 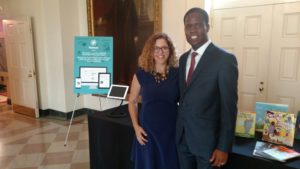 Since that event, Silicon Valley’s fortunes have taken a tumble; many tech companies with previously sky-high valuations are struggling to raise new funds. Felix, however, said he doesn’t follow the ups and downs in Silicon Valley very closely. From the start Zoobean was generating revenue, in contrast to some tech startup darlings in the Valley.

“One of the things we’ve benefitted from in the beginning — when I was raising money for the first time, [our investors] were very sensitive to us having revenue already,” he said. “They like business-to-business models. They were very wary of very high Silicon Valley valuations. I think that we have from the beginning had to achieve a certain level of revenue… which leaves enough for [investors] to still win coming in later. We’re not already at a peak.”

Zoobean currently has six full time employees, based in the D.C. area and in Pittsburgh, along with four part time employees and about 10 contractors.