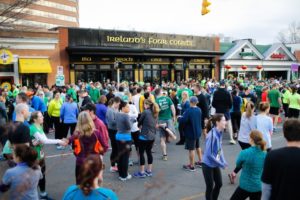 It’s going to be a busy six days at Ireland’s Four Courts (2051 Wilson Blvd) in Courthouse.

On Saturday morning, the local watering hole will again sponsor the sixth annual Four Courts Four Miler race. After the 9 a.m. race, the bar will be packed with runners enjoying their complimentary beverage and other post-race libations. There will also be a live band.

Registration is still open and will be available at Four Courts on the day of the race.

On Wednesday, Four Courts will mark its 20th anniversary. To celebrate, the bar will be offering Guinness for the original 1996 price of $4.50 from 4-8 p.m. Live music will follow, with Sanford Markley taking the stage at 6 p.m. and Sheen Righter at 9 p.m. There will also be a giveaway of $1,000 cash and other prizes, “in support of your loyal patronage.”

On Thursday, St. Patrick’s Day, Four Courts will open at 9 a.m. for the usual St. Daddy’s festivities. There will be live music all day and a heated tent in the back to help accommodate the crowds.

Dave Cahill, an Irishman and Four Courts’ long-time general manager, credits the establishment’s longevity, amid all the change in Arlington, to its core mission of being a community-oriented place to eat and hang out.

“I think we’ve never lost sight of the fact that we’re a neighborhood restaurant,” he told ARLnow.com today. “We have a great relationship with the community, we sponsor sports teams and donate to charities. We have a home-like atmosphere.”

The evidence of customer loyalty is literally hanging from the walls: Four Courts has sold 2,750 pewter mugs to its regulars. The mugs are proudly displayed around the bar, available for use when a customer comes in. Want more proof? Some of the staff are the now-grown children of Four Courts’ first customers.

In addition to pouring Guinness and running Four Courts, Cahill has another race day duty. He’s the race’s official running leprechaun, of course.

Ten minutes after the race starts, Cahill will take off down the course, dressed in green and accompanied by a lady leprechaun on a bicycle, announcing his approach. By the end of the four mile race, Cahill, 44, will have passed about two-thirds of the field.

“I usually catch the first people around the mile and a half mark,” he said. “I catch more people on the mile 2-3 turn. Then, coming up the hill [on Wilson Blvd between Rosslyn and Courthouse] people start looking over their shoulder waiting to see the leprechaun coming.”

Those who beat the leprechaun get a prize from Pacers. For every runner Cahill passes, $1 is donated to the Arlington County Police Benevolent Fund.

How does he do it? It’s not by tricks or the luck of the Irish. Cahill happens to be a very accomplished amateur runner. At last year’s Potomac River Run Marathon, he clocked a 3:10 finish time, good enough to qualify for his first Boston Marathon, in April.

The Four Miler will result in some road closures Saturday morning. The traffic alert from the Arlington County Police Department, after the jump.

The Four Courts 4 Miler Race will take place on Saturday, March 12th, 2016.  The Arlington County Police Department will conduct the following road closures from approximately 6:30 AM until 11:00 AM to accommodate this event:

Access to the Safeway Store at 1525 Wilson Blvd. can be obtained at North Nash Street or North Oak Street. Southbound Route 110 will remain open.

WMATA Bus routes will be detoured from Moore Street west on Wilson and north on Nash to their regularly scheduled route.