The Metrorail system will reopen at 5 a.m. Thursday, following today’s shutdown, but riders should expect possible single-tracking and delays as crews continue to fix damaged power cables along the tracks.

That’s the word from officials at a 6 p.m. press conference, in which Metro General Manager Paul Wiedefeld showed a video (above) of a damaged “jumper cable” found during today’s inspections. With most of the inspections complete, 26 damaged cables have been found — mostly along the Blue, Orange and Silver lines — and 18 have been repaired so far. 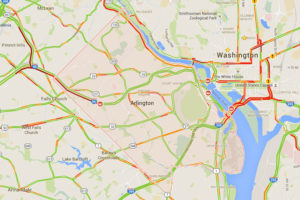 “The shutdown was necessary,” Wiedefeld said.

Fears of a traffic nightmare today largely did not materialize, as many workers either telecommuted, took buses or rode bikes to work. The morning commute was a bit slower than usual on some routes, while evening rush hour traffic — at least in Arlington — was lighter than usual.

Bus stops were certainly more crowded than usual today, but some of the biggest queues could be found at Reagan National Airport, as travelers waited for taxis.

The taxi line at Reagan. It literally 20 seconds to wish I was anywhere else but DC. pic.twitter.com/6LckRIMxQZ

So this whole shutting down wmata thing is working out well at DCA. No ubers, but I'm psyched to wait for a cab. pic.twitter.com/3AGOOPs4Q9

After the jump: the press release from WMATA about the inspections and the planned reopening of the system Thursday.

As of 5 p.m., Metro crews have completed the inspection of 80 percent of approximately 600 “jumper cables” located in 22 underground zones throughout the entire Metrorail system. Crews have identified 26 areas where damaged jumper cables and connector boots needed to be replaced.

Of those 26 areas, 18 cable repairs have been made. Crews will continue to work through the night to complete the remaining repairs.

“I know that today presented a hardship for many throughout the region, but I want to emphasize that this shutdown was indeed necessary,” said Metro General Manager and CEO Paul J. Wiedefeld. “I want to thank everyone for their patience and support in putting safety first.”

Following these repairs, Metrorail service will resume tomorrow at 5 a.m. on a normal weekday schedule. However, if additional track repairs are needed, Metro will announce the areas that are in need of repair as soon as they are known, resulting in potential impacts to Metrorail service in those areas.

Beginning at midnight on Tuesday, a team of electricians and cable construction crews and walked through 100 miles of tunnel inspecting for defects in jumper cables, connecting boots that were damaged or improperly positioned, water infiltration, and debris that could burn near cables.

“Throughout this intense inspection deployment, our focus has been on effectively mitigating fire risks,” said Wiedefeld. “We are being as clear as we can about what actions we have taken so that customers and employees feel safe as they ride Metro tomorrow.”

Metro’s Safety investigators are reviewing the history of the damaged boots and cables, and all findings will be shared with Federal Transit Administration (FTA) and National Transportation Safety Board (NTSB). Investigators will then review inspection records, age of materials and maintenance records to identify any procedures that were not followed or standards that were not met.

The suspension of Metrorail service on Wednesday followed an early morning electrical fire involving a cable in the tunnel outside McPherson Square Station on Monday, March 14. There were no injuries; however, service was disrupted along the Blue, Orange and Silver lines throughout the day.