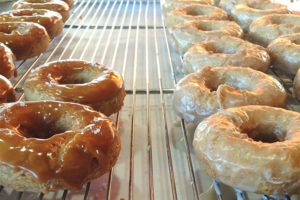 Vegan, dairy-free and “gluten-friendly” donuts are now being offered at Sugar Shack Donuts and Coffee along Columbia Pike.

“We’ll be offering these bad boys around 9 a.m. and 4 p.m. each day,” said store owner and former state legislator Rob Krupicka. “They are best when they are fresh out of the kitchen… We will be topping these with a variety of gluten-free toppings. We are also making vegan, gluten-friendly apple fritters.”

Why the “gluten-friendly” label?

“These donuts do not contain gluten, but as there is a lot of flour in our store, we can’t say they are gluten-free because the chance of cross-contamination is too high,” Krupicka said. He added that the new donuts will be an exclusive for the Arlington Sugar Shack location, at least for awhile.

“Because our Arlington store is bigger, we have more room to do new things in the kitchen,” he said. “We hope to offer these at all our stores soon, but for now, to get these rare, unicorns of donuts, head over to Sugar Shack Arlington on the Pike.”