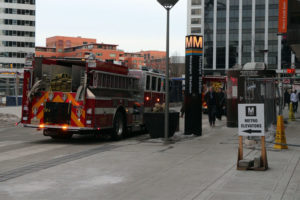 A Metro train got stuck in the Potomac River tunnel outside of the Rosslyn station this afternoon, leading to delays and a paramedic dispatch.

Metro evacuated passengers to the front of the disabled train — then through another train — and into the station, a video (below) shows. Metro requested that an Arlington County medic unit respond to the station as a precaution.

Orange, Blue and Silver line trains were single-tracking through station as a result of the incident. Passengers should expect significant delays.

The train that became disabled in the tunnel is one of Metro’s new 7000-series trains.

OR/SV/BL trains continue single tracking due to a disabled train outside Rosslyn. Delays in both directions. 3:04p #wmata

Disabled train UPDATE – all customers aboard have been safely evacuated out of tunnel. Crews working to move disabled train. 3:11p #wmata

Passengers had to walk through tunnel https://t.co/a3Uao2Bs0D

"in the process of trying to find a solution to move this train." @unsuckdcmetro pic.twitter.com/rNpNMo6npj

Now being herded to front of train. pic.twitter.com/tq4PDriJYX

Looks like they backed up an older train to the new train and passengers walked through to get to platform https://t.co/cY3XYfsU7q