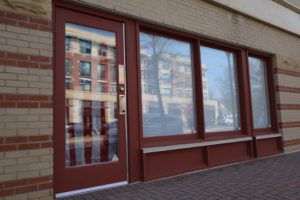 A group of Lyon Park and Ashton Heights residents is trying to challenge the legality of Nova Armory’s Certificate of Occupancy.

Nova Armory, a firearms retailer, opened in March in Lyon Park amid local controversy. The store’s owner, Dennis Pratte, is now suing dozens of residents and lawmakers, accusing them of trying to interfere with his business.

Five local residents launched their own legal offensive when they filed an appeal to Arlington’s Board of Zoning Appeals (BZA), challenging the county’s decision to issue Nova Armory a Certificate of Occupancy, which is required for businesses with a physical location in Arlington.

Arlington County has previously said that there is nothing it can do legally to prevent a gun store from opening, as long as it follows zoning rules and files all the proper paperwork.

The appeal was submitted by residents Julia Young, Emily Hughes, Bernadette Brennan, Grace Chan and Nathan Guerrero on March 2, along with the $575.40 filing fee.

In a report to the BZA, Arlington’s Acting Zoning Administrator, Arlova Vonhm, recommends denying the appeal and upholding Nova Armory’s Certificate of Occupancy at 2300 N. Pershing Drive. Vonhm addressed each of the challenges made by the residents:

The BZA is slated to consider the appeal, along with a long slate of others, either Wednesday night or at a possible carryover meeting Thursday. The board is not required to follow the staff recommendation when making its decision.

Apparently misunderstanding the nature of the appeal — any citizen who says they’re “aggrieved” by a zoning decision can file an appeal — Nova Armory posted several messages on Twitter Tuesday decrying elected officials and an “abuse of power” by county government.

NOVA Armory will continue to fight this abuse of power and attempts to close us down. Anti's and elected's want to play hardball- game on!