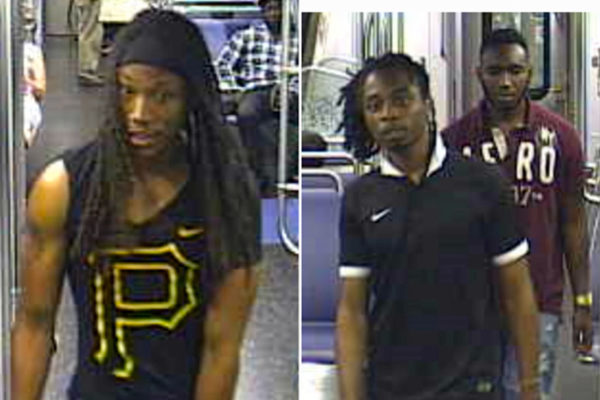 (Updated at 5:25 p.m.) Metro Transit Police are investigating a sexual assault that occurred last night on a Yellow Line train.

Metro says three men assaulted a woman, grabbing her inappropriately, after she refused to perform a sexual act.

The assault took place on a train near the Braddock Road Metro station. Transit Police investigated the incident at the Crystal City Metro station Thursday night, just before 10 p.m., prompting delays on the Blue and Yellow lines.

Late Friday afternoon, Metro released a press release (below) and surveillance images of the suspects (above).

Metro Transit Police are investigating a reported sexual battery aboard a Yellow Line train last night and are seeking the public’s assistance to identify three persons of interest pictured below.

The victim, an adult female, advised officers that she was approached by three males at around 9:30 p.m. aboard a northbound train from Huntington. As the train traveled between Eisenhower Ave and Braddock Road stations, the males approached the victim and asked her to perform a sexual act. When the victim refused, the suspects assaulted the female, including grabbing her body through her clothing.

The victim reported the incident to MTPD officers who broadcast a flash lookout and conducted a canvass of trains and stations along the line. The victim declined medical assistance and was subsequently transported to her residence by MTPD officers.

The suspects were described as follows:

Anyone who may have information about this incident is urged to contact Metro Transit Police detectives by calling (202) 962-2121 or by sending a text message to “MyMTPD” (696873).

One person was seriously injured and Bob & Edith’s Diner was damaged after two separate incidents of gunfire in Arlington last night. The first shooting happened in the Green Valley…