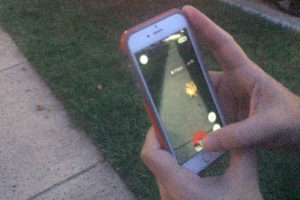 With the smartphone game Pokemon Go achieving unprecedented popularity, some of the geographic locations of “PokeStops” — the real-world places where the game spawns new Pokemon for players to catch — are coming into question.

As ARLnow.com first reported yesterday, Arlington National Cemetery has asked visitors to refrain from playing the game, after several people were spotted playing at the cemetery and called out on social media. (Some of the graves themselves are PokeStops.)

That followed reports of people playing at the Holocaust Museum, where officials say they’re asking the game maker to remove the museum as a PokeStop.

In addition to the cemetery, there’s another potentially inappropriate PokeStop in Arlington. As a Twitter user pointed out yesterday evening, a marker at the Pentagon that serves as a memorial to the children who lost their lives in the Sept. 11, 2001 terror attacks is a designated PokeStop.

Here's another #pokemonGO poke stop that they maybe should rethink. At the pentagon. @ARLnowDOTcom @wtop @DCist pic.twitter.com/E9XGUj0s6F

The center of the Pentagon is also a Pokemon “gym,” though that seems to raise more questions about Pentagon employees playing the game at work than it raises questions of appropriateness.

No word yet on whether game developer Niantic Labs plans to eventually remove “inappropriate” PokeStops like the Holocaust Museum or the Sept. 11 children’s marker. Such locations in the game were actually originally geotagged by users of another Niantic Labs game called Ingress.

END_OF_DOCUMENT_TOKEN_TO_BE_REPLACED

More Stories
Pike Leaders: Transit Plan ‘Does Not Even Come Close’ to Streetcar-Level ServiceArlington Pet of the Week: Jasmine