It’s been a busy summer for local restaurateur Reese Gardner.

Gardner has two new Arlington establishments in the works — Dudley’s Sport and Ale in Shirlington, which we first reported on in August 2015, and Quinn’s on the Corner, which we first learned about this past June, while lease negotiations were still reportedly in progress.

Despite Dudley’s nearly one year head start, it’s going to be Quinn’s, at 1776 Wilson Blvd, that opens first.

The neighborhood bar and restaurant, which will offer sports on the TVs and Irish and Belgian beers on draft, is aiming for a September opening, Gardner tells ARLnow.com. Work appeared to be in progress at the restaurant today.

Dudley’s, meanwhile, had been beset by permitting and regulatory delays stemming from its addition of a rooftop patio. 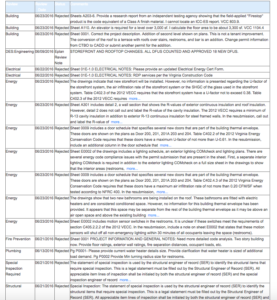 The county permit page for Dudley’s, at 2766 S. Arlington Mill Drive, tells the tale of the tape — a solid column of rejected permit applications, with comments from county inspectors like:

Gardner, who in February said he was hoping to open Dudley’s in time for the beginning of the summer, did not provide an updated estimate on when it might open now. He said the process has been excruciating, ballooning in complexity as time has gone on.

“We actually had to divide the permit into and interior permit and exterior permit because of the rooftop and new facade,” Gardner said. “If you read they are also making us go through a special inspection process over and above the normal one.”

Though some improvements have been made in recent years, Arlington County has been criticized for having a permitting process that many business owners describe as unfriendly to smaller, brick-and-mortar businesses.