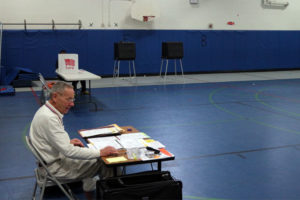 The presidential election showdown between Donald Trump and Hillary Clinton has been endlessly covered on cable news, online and in print this summer. The Arlington County Board race — considerably less so.

The rule of thumb is that most voters aren’t paying much attention to local races between the primaries and Labor Day.

But that hasn’t stopped certain local candidates from doing some campaigning this summer. Independent County Board candidate Audrey Clement, for instance, just sent out a press release detailing a number of campaign pledges, including building more school capacity at a lower cost.

Clement is facing off against Democratic incumbent Libby Garvey in November.

Republican congressional candidate Charles Hernick, meanwhile, sat down for a Reddit Ask Me Anything session in July. And Mike Webb, who’s running as an “independent conservative” write-in candidate in the congressional race, has blasted out some 100 press releases since he lost to Hernick in the Virginia 8th District GOP convention. (During that time Webb also accidentally made national news.)

Our question for readers: what has been your level of interest in these general election races so far? Is it even worth trying to campaign in the summer, or should candidates perhaps stick with the Labor Day conventional wisdom?