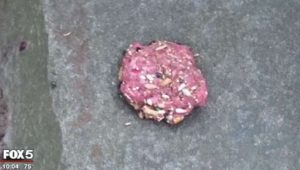 Are several pill-laden meatballs found along a local stream an attempt to poison dogs? That’s what the Animal Welfare League of Arlington is trying to determine.

On Thursday, a local mother wrote to a local email listserv to warn about meatballs her dog scarfed up along Four Mile Run in Bluemont Park. The meatballs, she said, contained what her vet thought was rat poison. (The vet was able to quickly induce vomiting and the dog is expected to be okay.)

The story quickly made its way around other local listservs and attracted the attention of Fox 5, which interviewed the dog owner.

“We received a call [Thursday] afternoon from a resident who thinks her dog may have ingested poisoned meat while they were walking in Bluemont Park at the intersection of Four Mile Run trail, near the stream,” Sherman said. “The dog owner gathered some of the meat and kept it refrigerated. We are picking up the sample now and will send it to a lab for testing.”

A similar incident was reported last year, after a resident found sausages stuffed with caffeine pills along a residential street near Lee Highway.

As of Tuesday morning, Sherman said the testing was still in progress and it will likely be a week before we know what exactly was in the meat.

The original listserv email is below.

My daughter and I were walking our dogs today at Four Mile Run/Bluemont Park in Arlington, because we like the paths next to the stream. On our way back to the car, the dogs were wading in the water and when they got out, Yoko found something to eat. I wasn’t able to pull her away fast enough so she ate a good amount. I took a closer look and discovered more than 10 poison baits right next to the stream on and between the rocks (raw ground beef meatballs, mixed with all kind of pills, pellets and grain). Obviously we got her back to our car as fast as possible and went to the animal hospital straight away.

The vet made her vomit and since it was only 15-20 minutes between eating the stuff and the treatment in the hospital, she was confident, that she got everything out of Yoko’s stomach. The vet is 99% sure that it’s rat poison. We reported everything to Animal Control/Animal Welfare in Arlington, got back to Bluemont Park and collected the rest of the toxic baits…

I am absolutely shocked about this incident and hope that Yoko will recover completely. And of course I hope that no other dog was harmed by this crime of a maniac. So please (!!!) watch out when you are walking your dog(s) in that area but I guess, that can happen everywhere.

If you have an idea what else we could do (besides reporting it to Animal Control), I’d appreciate any advice. I know it’s unlikely to find this criminal but I am ready to do everything to increase the chances.