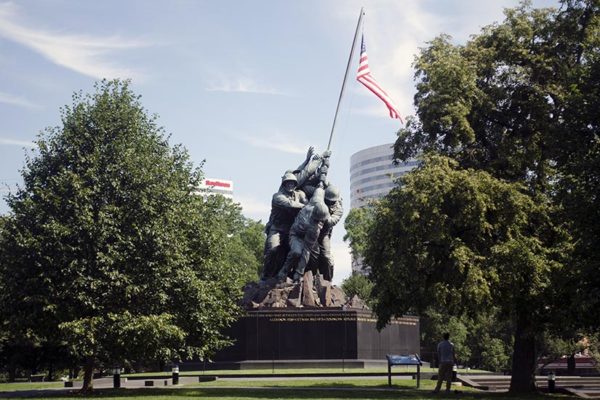 For years, visitors to our country’s most recognizable military monument have had but one nearby option should they need to use the restroom: a line of green porta-potties.

The porta-potties near the Marine Corps War Memorial in Arlington might be convenient, but they were also “unsightly and they smelled,” says Rep. Don Beyer (D-Va.). Plus, they presented big challenges for disabled veterans visiting the memorial. 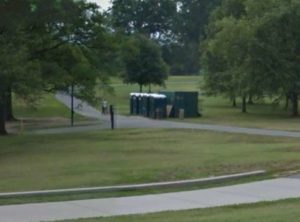 Luckily, the local philanthropist David Rubenstein stepped up last year with a pledge of $5.4 million to rehab the monument, the lighting and the landscaping around the 62-year-old monument, colloquially known as the Iwo Jima memorial. Rubenstein’s gift will now also fund permanent restrooms.

(Rubenstein has also funded post-earthquake repairs to the Washington Monument and to Arlington House, and pledged $50 million for the expansion of the Kennedy Center.)

A bill sponsored by Beyer passed last week, authorizing the construction of the restrooms. The bill had bipartisan support, although its passage came a year after Rubenstein’s donation was first announced and it was made necessary by a provision that stemmed from a debate over the location of the Air Force Memorial 14 years ago.

“It’s a small victory but it moves us in the right direction,” Beyer said.

Amid congressional gridlock on important issues like the budget, immigration and gun safety, Beyer said there is still plenty of work getting done in Congress — provided the work is politically uncontroversial.

“There are places where we really can’t get things done,” said Beyer. “But those are all places where there are significant philosophical differences between Democrats and Republicans. On things where there is consensus, we can actually move pretty quickly.”

But the fact that this pretty obvious improvement is getting done mostly because a billionaire ponied up for it may make a larger point about the current state of American governance and budget priorities.

“We’re fortunate to have the David Rubensteins of the world,” said Beyer, “but it is sad that we can’t free up more money for investments in public infrastructure.”

Beyer cited figures that suggest the U.S. is $3 trillion behind on needed infrastructure work due to deferred maintenance. The U.S. Park Service alone has $11 billion in infrastructure needs, including the funding still needed for repairs to Memorial Bridge.

For needs not deemed essential enough to receive taxpayer funding, private donations may be the only way to get it done in the near term.

“Until we get our arms around entitlement reform, finding ways to grow our discretionary resources for things like infrastructure, we’re going to be dependent on good folks like David Rubenstein,” Beyer said.

Though Beyer said he had not seen a timetable yet, he expects that the Iwo Jima improvements will take at least 12-18 months to complete.

“Arlington is a wonderful place to live — it gets all these awards for best suburb or best small city — and hopefully getting rid of the porta-potties at the Iwo Jima memorial will be another small step in improving the livability of Arlington.”

Photo (below) via Google Maps