This biweekly column is written and sponsored by the Arlington Office of Emergency Management.

Less than 24 hours into his temporary assignment as the Emergency Management Coordinator, Captain Mark Penn watched one, then two planes fly into the World Trade Center.

Still unsure of his new role, he headed to the Emergency Operations Center (EOC) planning to keep County Leadership informed of events. As he drove up Columbia Pike, he looked up to see Flight 77 pass overhead on its collision course into the Pentagon. 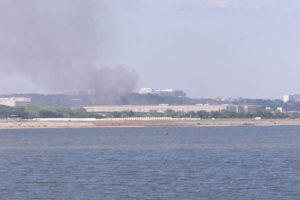 A New Chapter in Emergency Management

Little did he know it as he opened the EOC that day, but Penn was starting a new chapter in emergency management for Arlington County. In 2001, the Office of Emergency Management (OEM) hadn’t been formed. This wouldn’t be done until 2004, after extensive research by County Leadership. The Emergency Communication Center (9-1-1) was still part of the Police Department; it wouldn’t come under OEM management until 2004.

In 2001, emergency management was still one position in the fire department, primarily focused on preparing responders.

Emergency Management: Coordinating the Response Behind the Scenes 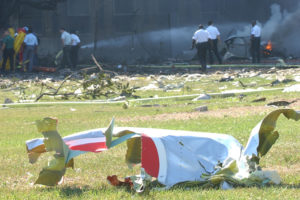 While Public Safety personnel coordinated operations at the Pentagon, Penn’s initial hours, and next 21 days, were consumed in the EOC, supporting the responders.

Over 3,000 responders were working at the Pentagon, each requiring security clearance to do their job, as well as food, housing and communication with family members. Resources had to be requested and moved immediately cross-country, all while airspace was closed. A local emergency had to be declared.  The EOC worked behind-the-scenes to make sure the response went smoothly.

You Can’t See Us, But We’re Still Here!

And much of our work remains the same: behind-the-scenes support during a response.  During this winter’s “Snowzilla” our office opened the Emergency Operation Center and coordinated with public safety, health, transportation, finance and communication partners, as well as County Leadership and state and regional partners.

Today, our focus on emergency preparedness includes all of Arlington County: both our response partners and residents. We continually plan and train with our partners to prepare for potential emergencies. Resident engagement and preparedness has also become a priority. The Active Shooter Awareness and Preparedness training program is an example of this.

However, September is National Preparedness Month, and the perfect time to get prepared! Complete item from below during September (or, be a Preparedness Champion and tackle one per month through December!).