A new barbecue restaurant and pub may replace the now-closed Hard Times Cafe in Clarendon.

The owners of A-Town Bar and Grill in Ballston, Don Tito in Clarendon and Barley Mac in Rosslyn are planning the thus-far unnamed venue in Hard Times’ two-story space across from the Clarendon Metro.

The plans were revealed during a County Board review of a site plan amendment for A-Town (see below).

“We’re soon to take over Hard Times,” Mike Cordero, a partner in the restaurants, told the County Board. The new venture was described as “a really big barbecue restaurant or pub” that may be sports-oriented.

The restaurant could open as soon as next spring or summer, although a source says the deal to take over the Hard Times space has not been finalized. 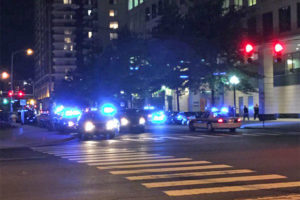 The “fight in progress” call happened around 9:30 p.m., amid the bar’s popular Sunday Funday festivities. At the bar’s request, police banned five of the alleged fighters from the establishment. One person was arrested.

“Arriving officers located five subjects and all were banned from the location,” according to a crime report. “One suspect, Oscar Hernandez, 26, of Woodbridge VA, was wanted on an assault charged and was arrested for the outstanding warrant.”

A source at A-Town said the fight was “nothing” and “ended fast.” The incident came a day after the Arlington County Board, after a lengthy discussion, approved a six-month extension of A-Town’s site plan amendment for live dancing and entertainment.

A county staff report said that police calls to A-Town were up by a third in 2016 compared to a similar period in 2015. Seven of the 16 calls this year were made on Sundays. Resident complaints about noise and rowdy bar patrons, however, were down, a county staffer said during Saturday’s Board meeting.

Board members expressed concern about the ongoing issues at A-Town but acknowledged that its management was proactive in trying to address the problems.

Without the entertainment permit, Cordero said, “you might as well close A-Town.”