Nick Freshman knows what it takes to run a successful restaurant, and he’s hoping to use that knowledge to help restaurateurs and investors alike.

Freshman, 40, co-owns Spider Kelly’s in Clarendon and was also a partner in Eventide Restaurant before it was sold and replaced by Don Tito. All told, he’s been involved in the development of a half dozen successful restaurant concepts. 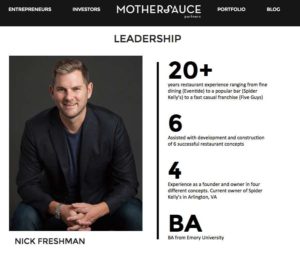 After spending the past 20 years working in and then running restaurants, Freshman is trying something new: he has launched Mothersauce Partners, an investment and advisory business that seeks to connect new food and drink concepts with investors while providing expert advice and key industry connections.

Freshman said Mothersauce — a reference to the foundation of French cuisine — allows him to put his passion into action.

“One thing I really love to do is helping other people who are trying to make it,” Freshman said. “I’ve been doing it as a function of something I like to do. In the past year I’ve explored figuring out a way to make that a business, and I finally decided to take a leap this summer.”

“This is a way for me to be a part of a lot of other interesting concepts without having to actually have to deal with the stress and anxiety of running them,” Freshman continued. “There’s all this great talent and they have lots of great ideas, but they either don’t have the capital or they don’t have the expertise. I can provide both of those… but not have to be the [person answering the] phone call at 3:00 in the morning.”

Freshman, who recently added a beer garden behind Spider Kelly’s but doesn’t otherwise have plans to expand it, said he regularly fields inquiries from investors who want to get in on the next big nightlife or restaurant hit.

Mothersauce already has its first concept: Takoma Beverage Company, a soon-to-open spot for handcrafted coffee and tea in Takoma Park, Maryland, helmed by two veterans of Northside Social, which Freshman says is “one of the greatest success stories in Clarendon.”

Freshman says he has “a lot of leads on other projects” and hopes to have a few more in development by this time next year. He hopes to have a “balanced” portfolio, working with both first-time operators “who have lots of potential” and with experienced restaurateurs who could use his local market expertise.

He’s also equally likely to pursue a restaurant concept that may be suitable for only one or two locations as he is to go after a fast-casual chain — say, the next Sweetgreen — that could someday expand nationwide.

“Part of this is an experiment to see what the deal flow is, what is coming in and what do people most need… where is the opportunity,” Freshman said. “I really think it starts and ends with the operators… you find the great talent, you find the great concept, then you execute on it.”

While Freshman is the main figure in the business, he has a roster of advisors he can call on, depending on project needs. And new restaurant owners need plenty of advice: from negotiating a lease to finding investors to building out a space to marketing the restaurant to responding to online reviews.

The launch of Mothersauce Partners comes at a conspicuous time for the local restaurant industry. By our count, more restaurants have closed than opened in Arlington so far this year while the pipeline of new restaurants has slowed.

Despite some local woes — and success in the restaurant industry is famously difficult to achieve in the first place — Freshman said there’s still plenty of opportunity.

“I think there’s a lot of great concepts that have a lot of potential for growth, and there’s a lot of great investors who want [to be in] this space,” he said. “They want to invest in the restaurant space, but they’re not sure how, and… it’s scary, it’s high-risk. What we do is we say ‘listen, we vetted this concept, we know these guys, we’re going be a part of this project, we’re going help them, come in with us and let’s kind of do this thing together.'”