It’s probably safe to say that “shock and horror” was the predominant reaction among local Democrats to Donald Trump’s surprise victory in Tuesday’s presidential election.

In Arlington, only 17 percent of those casting ballots voted for Trump, while 76 percent voted for Hillary Clinton. Early on, as the results just started coming in, some officials we spoke to at the Democratic victory party in Clarendon refused to even concede that there was even a possibility that Trump could be elected.

Both the surprise over the result and the fear over what a Trump presidency means for Arlington and the nation was on display at Wednesday’s Arlington County Board meeting. Each Board member weighed in with their thoughts on the election. (See video, above.)

Here’s a bit of what Christian Dorsey had to say:

The outcome of this Presidential election was not what I desired, nor what I ever thought possible. This morning, my wife Rachel and I had to tell our budding feminist, 8-year-old daughter, who just a couple of weeks ago dressed as a suffragette for Halloween and explain to her that our candidate lost. That was hard. But harder still was finding answers to her very natural follow up questions, why, how? But I have to tell you that hardest of all, were finding words of reassurance to an outcome that in my opinion has dramatic consequences for our country. I hope to be proven wrong. Tens of millions of Americans, 20,000 Arlingtonians, and for all I know, perhaps some of you in this room chose Mr. Trump. I won’t try to believe it, but I will try to accept it.

County Board Chair Libby Garvey said a Trump presidency will not change the nature of the Arlington community.

Jay Fisette said he was trying his best to cope with the results and give the new president a chance.

Yesterday was likely the most consequential election in my lifetime, for our country, to our world, to our understanding of democracy, the economy and our environment. Earlier today, I watched Hillary Clinton’s poignant and gracious concession speech and I actually took to heart her advice.

Number one, to respect the orderly transition of power that which is fundamental of our constitutional democracy. Two, to work with ourselves to open our minds and give our President Elect a chance to lead. And three, to continue to believe in our vision, in our values for the community, for the country.

In each of these, the first is easy for me. Everyone must and will come together to respect and accept the election results, as that is how we work, via the example that was set by our very first president, George Washington. So congratulations, Mr. Trump.

The second will be harder for some, like me, to open my mind and give our President Elect a chance to lead, yet we must do that. After we each finish our own grieving, those that supported Mrs. Clinton, and our assessment of what happened and why it happened, we must give the President a chance.

Independent John Vihstadt, the lone non-Democrat on the Board, said he was disappointed by the slate of presidential candidates this year.

Regardless of our political perspective, everyone in the nation and across the globe is still processing the remarkable outcome of yesterday’s election. Many are jubilant, others are apprehensive, or even fearful, and many others no doubt are conflicted. In my view, all four party nominees on the Virginia ballot for President this year fell short of what our nation deserved and needed in 2016. I voted, but did not vote for any of them. Still, the American people have spoken.

I am confident that our democratic institution will heal and endure, and I hope and pray, that people of goodwill will come together, lower our voices, and work together to find common ground to advance the human condition.

I’m reminded of the statement chiseled in stone above the main door to the state capitol of my home state of Nebraska, “the salvation of the state is watchfulness in the citizen.”

Katie Cristol said Arlington County would “navigate the coming days as we have other major economic and political events in the past” thanks to residents, county staff and prudent planning.

Cristol said the county would continue to respect the rights of immigrants, including undocumented immigrants, in the face of Trump’s deportation promises.

I want to take this opportunity to reaffirm what has been a hallmark of Arlington County: inclusion and protection of our diversity and of our residents. I want to reaffirm that my commitment to the safety of our immigrant neighbors, emphasizing as this board did in 2016 that all residents and visitors to Arlington County have a right to public safety protection. That it is our longstanding policy that Arlington County law enforcement does not monitor, detain, interview or investigate people solely for the purpose of determining their integration status, and that the services we provide in Arlington County, including education, public transit, access to our parks and to our libraries are not restricted based on immigration status. 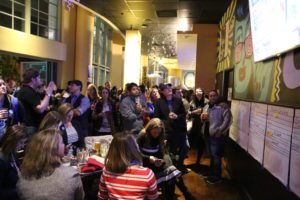 At an Arlington Committee of 100 event Wednesday night, a number of local political figures discussed what the election meant to Arlington County.

Jim Presswood, chairman of the Arlington GOP, told ARLnow.com that “we’re a little bit unclear” on the exact ramifications of a Trump presidency on the county.

“With the new administration you’ll have new people coming in, that will be a change,” he said. “Maybe government is a bit more restrained, so that might have impacts as well.”

Presswood said a more limited government under Trump, with streamlined regulations, will create more business opportunities, which will be good for business and for the working class.

“I think it’s a great opportunity for us to take a look at this whole segment of our population, especially in the industrial Midwest, which has been facing lots of job losses with manufacturing going overseas,” he continued. “The key thing is jobs, especially for the working class, creating more economic opportunity for them. That’s not something that would have much effect in Arlington, I suppose, given how many folks here have advanced degrees, but there are people here that are part of the working class so that’s not to be forgotten.”

Kip Malinosky, chair of the Arlington County Democratic Committee, was also a speaker at last night’s event. He told ARLnow.com that he remains worried about Trump’s divisiveness.

I hope that there will be a minimal impact on Arlington, but I am worried that there could be significant harm. Arlington is a welcoming community that thrives with immigrants and residents from all over the world. Trump’s rhetoric and platform could put our diverse community in jeopardy. Furthermore, our ability to attract top businesses from around the world would likely become much more difficult. Again, I hope for the best and that Trump will leave some of his most incendiary rhetoric and policies behind, and concentrate on being President of the entire United States of America.

During our live election night broadcast, from Sehkraft Brewing in Clarendon, we asked some local Democrats about a potential Trump victory, which at that point still seemed unlikely.

State Senator Adam Ebbin weighed in on what a Trump presidency might mean for Arlington by focusing on the military.

They both support a strong defense. Clinton has a sensible plan, has the experience and the advisors to do appropriate planning and make sure our military is right-sized. To hear Trump talk about it, he would just invest a lot in the military; I don’t know if he would do that haphazardly or if Congress would go along with that. I don’t know if he has a detailed or well-informed policy plan based on his own knowledge.

If by some stretch of imagination Donald Trump is elected president, I think you would see a lot of negative reaction in the country, certainly in Arlington, a lot of bitter disappointment.

We’ve got to make sure Hillary gets elected, I hope we’ve done it. I think we would be spending the next four years trying to maintain the rule of law and our constitution, because I don’t think Trump and those supporting him really understand the Constitution, and the rule of law is what makes our nation great. Anytime you’ve got people living together you’ve got disputes. You’ve got to learn to solve them through the law, not who has got the biggest gun or the biggest fists and that’s going backwards.

More investing in our people is what I think we need to do as a nation. Investing in education, healthcare, childcare, all of those things. I think Trump is interested in investing in himself.