The next time you get direct marketing mail don’t be so quick to throw it out without at least taking a look. Consider that Lee Garvey and the employees at Click2Mail may have been the people working hard to get the materials into your mailbox. 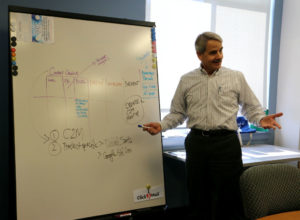 Garvey worked for years at the U.S. Postal Service, starting as a mail carrier in Arlington and moving into other roles, before founding Click2Mail in 2004. His time as a mail carrier exposed him to a lot of local customers who encountered the same problem: They easily could send out a few letters at a time but had difficulty handling large groups of mail.

So Garvey launched a service to make it easier.

“If you’re just mailing five or 10 letters, it’s easy. But when you get into the higher numbers you have to have a system and a postage meter and all that stuff. So I set out to create an online system,” Garvey says. “I’ve experienced the problems we solve for our customers and the way I got started was identifying a problem and finding a way to solve it.”

The small business digitally creates many types of marketing mail, such as when a business sends out hundreds of postcards to advertise a promotion. Click2Mail also can personalize communications so that a car dealer, for example, can send a letter that personally addresses a customer and mentions the type of car the customer recently purchased. Another service is to offer quick turnarounds for “just in time” communications, which tend to be more time sensitive. Garvey says that if a customer submits a digital file by 8 p.m. on a weekday, Click2Mail often can send out personalized notifications as quickly as the next day for a fraction of what such a service used to cost.

“The sender of the postal mail doesn’t have to do anything. They send to us their assets and documents and mailing lists and we take care of the rest,” Garvey says.

Garvey launched Click2Mail while still working at the Postal Service. USPS officially ran it for three years but then decided not to oversee the service anymore. Around that time, Garvey ended up leaving the Postal Service and branched off Click2Mail as a separate entity. The business still partners with USPS, among others, and can be accessed both through its own website and through the Postal Service’s. 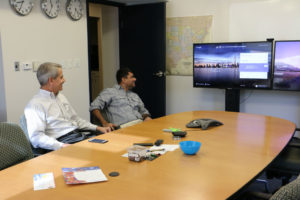 Click2Mail has an office in Clarendon and 15 employees who work throughout the United States. Garvey is a huge believer in allowing staff to work remotely at least a couple days a week — even the local employees — and relying on video conferencing for staff collaboration. He says the concept is “one of the benefits of having a largely digital business.”

The Click2Mail team has experienced ups and downs with the fluctuating economy and people’s changing desires to send physical mail, but it currently is in the process of expansion. The business is looking to hire new employees and is revamping its website. Click2Mail has also gained positive exposure thanks recent recognition from Entrepreneur as number 203 on the magazine’s list of the 360 best and most well-rounded small businesses in America.

“We’re very happy with the place where we are and we’re growing,” Garvey says.

Another positive industry trend, Garvey notes, is one that surprises many people: Traditional mail marketing and advertising is back on the rise.

“Businesses that years ago decided that they were going to go all digital and start sending everything by email… they discovered that the level of attention that’s paid to that type of thing is shrinking,” Garvey says. “People are throwing money at the digital world and discovering it’s not as effective as it used to be and the effectiveness of direct mail is increasing.”

Part of that shift may be due to an “everything old is new again” attitude and a “snail mail” revival thanks to millennials. Garvey explains that each year the Postal Service does a household survey and within the last year “they discovered that millennials are very enthusiastic about physical mail.”

But Garvey knows that going about direct mailing completely in an old school fashion isn’t sustainable in the long term. That’s why Click2Mail has continuously updated and modernized its services. It taps into the trend of companies integrating outsourced microservices.

“We have been following closely and adapting our services to that type of model,” Garvey says. “It’s an old thing in a lot of people’s minds, the idea of postal mail. But we’re doing it in a very modern, very technologically savvy way that gives people the opportunity to create mail in a ‘just in time’ fashion that you never could have imagined just a few years ago.”