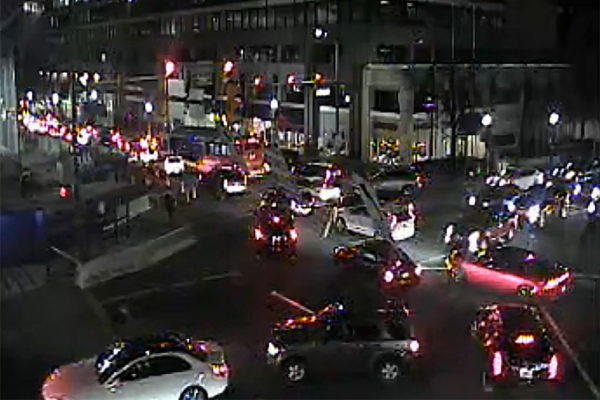 This week’s issues, the police department explained, were caused in part by road paving that’s part of a big development project.

“Heavy traffic in Rosslyn this week was [exacerbated] by street paving as part of the ongoing construction at Central Place,” ACPD spokeswoman Ashley Savage told ARLnow.com. “The paving is now complete and we are seeing a return to normal traffic volume in the area.”

Savage said the department has a detail that directs traffic at the congested intersection on weekday mornings, but doesn’t have a similar detail for the evening rush hour.

“As part of our ongoing efforts to address traffic issues in Rosslyn, the police department funds a special detail in which two officers direct traffic during the morning rush hour at the intersection of Wilson Boulevard and Lynn Street in order to keep traffic from blocking the box,” she said. “This has a positive impact on the immediate area but traffic still backs up at the intersections west of that location due to infrastructure capacity.”

“While our detail has specific hours, our officers do conduct additional enforcement at the intersection on a random rotating basis with the goal of compliance with traffic laws even when police are not present,” Savage added.

ACPD says it is working with county development officials to improve the department’s construction traffic response.

“The police department is coordinating with the Development Services Bureau to better address traffic issues related to the construction,” said Savage.

However, Savage added, “We must balance our available police resources with all requests for traffic enforcement throughout the County.”