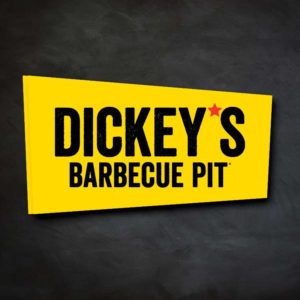 A Texas-style barbecue restaurant chain is considering opening an Arlington location next year.

A press release yesterday from Dickey’s Barbecue Pit included an Arlington dateline, but only said that the new restaurant would be opening in “the state of Virginia.”

Asked for clarification, a company spokeswoman told ARLnow.com that the restaurant may open in Arlington.

“The exact location has not been decided yet, but they are looking at locations in Arlington and Alexandria,” said the spokeswoman.

The press release is below.

Arlington, VA — Dickey’s Barbecue Pit will be opening its tenth new location in the state of Virginia with a new store slated to begin serving delicious, Texas-style barbecue in 2017. The new store’s owner, Mario Aguilar, is excited to embark on this new adventure by opening his very first Dickey’s Barbecue Pit location in the community he grew up in.

Born and raised in Virginia, Aguilar has been part of this community his entire life and is excited to serve Dickey’s Barbecue to the people whom he considers his family. Aguilar has been a business owner for the past 12 years, owning multiple AT&T locations throughout Virginia. When he decided it was time to get into the restaurant industry he knew Dickey’s was the right place for him because he loves the food and the 75-year-old brand.

“Dickey’s is a great brand that is well-known throughout the nation and I am excited to be a part of it,” says Aguilar. “Dickey’s will do well in this community because there is a large need for slow-smoked barbecue, and I am proud to be the one to provide it.”

Cool fall mornings mean leaf collection season is near. And Arlington’s Department of Environmental Services is reminding homeowners collecting their leaves and cleaning out their gardens to use only paper…