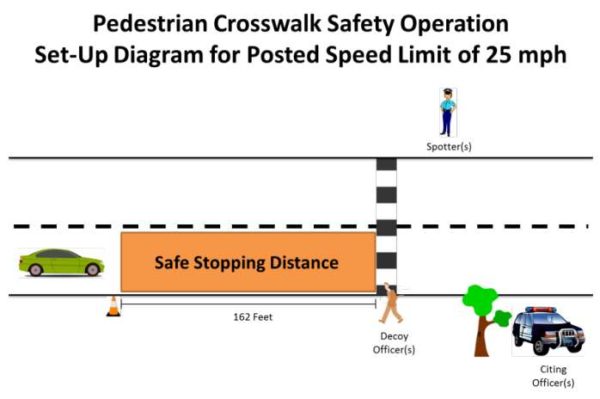 (Updated at 2 p.m.) The Arlington County Police Department is continuing to conduct traffic enforcement details around the county — and is finding no shortage of drivers who don’t stop for pedestrians.

Last week police issued 21 traffic tickets in just one hour on Washington Blvd in Virginia Square, near where a teen girl was struck by the driver of an SUV in December.

The operation utilizes an undercover officer who crosses the street in a crosswalk.

“Using traffic data, drivers in this 30 MPH zone were given 150 feet to see the pedestrian and stop their vehicle,” the department explained in an Instagram post. “Our pedestrian always waits for a safe break in traffic and never enters in disregard of approaching vehicles.”

The enforcement detail was similar to a pair in the fall, along Columbia Pike and Lee Highway, that resulted in 35 citations.

“The pedestrian safety enforcement campaign is one piece of our overall effort of ensuring the safety of pedestrians, cyclists and motorists and maintaining the safe and orderly flow of traffic in Arlington County,” ACPD spokeswoman Ashley Savage tells ARLnow.com

“Through this high visibility enforcement, the goal is compliance with failure to yield even when police are not present,” she continued. “No matter how you commute, there are ways we can all be street smart while sharing our roadways.”

The enforcement campaign started to ramp up in early 2016 after the police department saw Montgomery County, Md. police successfully implement a similar strategy, which was created by the National Highway Safety Transportation Administration.

Expect more enforcement in 2017, according to Savage.

“Additional officers are being trained and it is anticipated that the number of details each month will increase,” she said.

Pedestrian crosswalk enforcement was conducted this morning at the intersection of Washington Boulevard and N. Nelson Street. Using traffic data, drivers in this 30 MPH zone were given 150 feet to see the pedestrian and stop their vehicle. Our pedestrian always waits for a safe break in traffic and never enters in disregard of approaching vehicles. In one hour, 21 citations were issued for failure to yield to pedestrians in the crosswalk. Help make #ArlingtonVA safer by sharing our roads! No matter how you commute, there are ways we can all #BeStreetSmart!