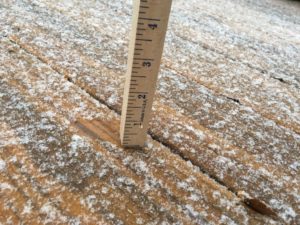 Rain, wind and, potentially, snow, are in the forecast for Thursday morning.

For Arlington, that could mean some wet accumulating snow during the morning commute, forecasters say.

Locales north and west are likely to get the most snow, but VDOT is warning of the possibility of a tough commute.

From a VDOT press release:

Winter weather is far from most minds today, but the Virginia Department of Transportation asks drivers to remain vigilant in monitoring forecasts and planning commutes–a mix of rain, snow and high winds could have major impacts to Thursday’s morning rush.

VDOT asks that drivers monitor forecasts closely for changes, and to stay off the roads during inclement weather. Potential for high winds and isolated squalls will mean limited visibility.

Crews will stage roadside through northern Virginia by midnight tonight, with resources concentrated in Loudoun County. Due to a forecast for rain ahead of snow, crews will not brine roads in advance, but will treat with salt and sand as needed.

Arlington County, meanwhile, says it is monitoring the weather as it turns from springlike warmth today to freezing cold tomorrow.

Snow? But it's sunny outside! We're keeping an eye on the forecast and will respond accordingly, as snow may fall tomorrow morning.

Take a look at tomorrow morning at 7am, could make for a messy morning rush! I've got the latest next at 4 pic.twitter.com/y83Gy0SBGY