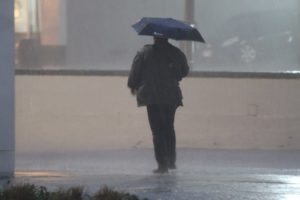 (Updated at 9:55 a.m.) It’s going to be a rainy day in Arlington and the D.C. area, with heavy rain and scattered storms likely.

The rain may cause some minor flooding problems on the roadways and along streams, forecasters say.

“Rain will be locally heavy at times through this evening,” said the National Weather Service. “Localized flooding of small streams and creeks as well as urban areas is possible late this morning into this evening.”

At 907 AM EDT, radar indicated showers with isolated thunderstorms were located along a line extending from Ashburn to Aquia Creek. Movement was northeast at 40 mph.

Locally heavy rainfall can be expected.

Locally heavy rainfall is also occurring with these showers, and may cause ponding of water on roadways and cause small streams to go out of their banks. Be alert for the potential of standing water and hydroplaning.

The weather is already causing problems on the roads and at the airport:

Due to weather/low ceilings you may experience flight delays this am. Please check with your airline for flight status.

Looks like the crash is in the usual spot: SB I-395 just past the Pentagon. Driver said he hydroplaned, hit guardrail. pic.twitter.com/nL39K5yB0C