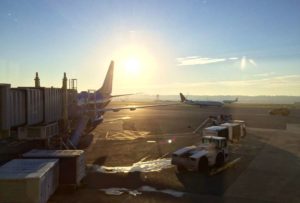 With residents still worried about the impacts of noise and increased air traffic around Ronald Reagan Washington National Airport, the region’s congressional representatives are pushing for change.

Beyer is a member of the Congressional Quiet Skies Caucus, and urged the committee to fund health studies on the effects of airplane noise. The legislators cited past studies that have linked excessive exposure to noise with hypertension and learning difficulties.

Beyer requested that appropriators include language directing the Federal Aviation Administration to expedite its review of current noise standards.

“Airplane noise is a pervasive problem around the United States, but especially in Northern Virginia neighborhoods below ever-shifting flight paths in and out of DCA,” said Beyer in a statement. “To date, the FAA has not satisfactorily addressed the situation, while the problem has worsened in many communities. It is past time for Congress to take action, and I hope my colleagues on the Appropriations Committee heed our call.”

They point out that Reagan National has experienced six consecutive years of passenger growth and outpaced passenger volume at Dulles in both 2015 and 2016. In fact, they say domestic commercial passenger traffic since 2000 has increased by 50 percent at Reagan, but it decreased by 9 percent at Dulles.

Congress is preparing to work on legislation to reauthorize the FAA for this year. The delegation said that maintaining the current rules will allow Dulles and BWI to continue to grow and serve long-haul destinations, while also not subjecting National to additional traffic.

“Our airports enable Maryland, the District of Columbia and Virginia to access the global economy in ways that create jobs and opportunities for the region,” the letter reads. “Part of the rationale for the relocation of major corporate headquarters such as SAIC, Hilton Hotels, Nestle USA and Volkswagen of America is the connectivity our regional aviation system provides.”

Both the House and Senate are expected to consider FAA reauthorization proposals in the coming months. The current FAA authorization expires at the end of September.